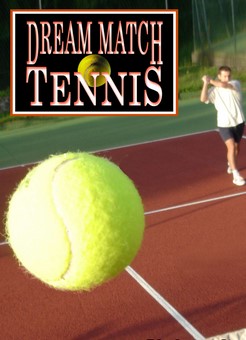 Dream Match Tennis is a 2006 tennis simulation game developed by Bimboosoft, a company based in Saitama, Japan. Unlike other games in its genre, Dream Match Tennis was aimed to produce a more realistic depiction of the sport, requiring more skill from the player in order to direct their shots accurately.

Due to the small size of the Bimboosoft Company, they were not able to use the same level of graphical effects in Dream Match Tennis as other companies such as Sega could with games like Virtua Tennis 3.

There are 5 different kinds of shot in Dream Match Tennis;

A Super-Hard Shot has also been recently added, which is harder than the hard shot, but with the added risk of the shot going long or into the net.

The normal shot has been criticized for some of the characters, as it is so weak for the likes of Mason that a hard shot must be used the entire time, negating the use of the normal shot.

Serving is also performed via correct timing- each character has a unique serving motion, and the shot button must be pressed at the correct moment in order for the ball to go into the court. The moment that the shot button must be pressed varies depending on what kind of serve is being hit, and at what pace the serve is being hit at (pressing the upwards button makes the serve more powerful, whereas pressing the downwards button makes it travel more slowly). The serve is noticeably more effective in Dream Match Tennis than in other tennis games, and the characters with the more powerful serves are capable of hitting up to 14 aces per set (depending on the quality of the opponent).