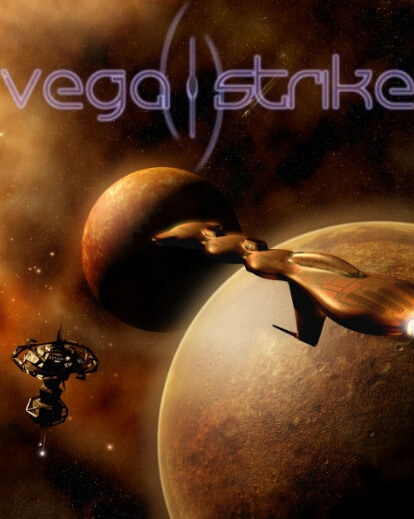 Vega Strike is a first-person space trading and combat simulator, developed for Microsoft Windows, Linux, FreeBSD and OS X systems. Many of the core game mechanics of Vega Strike are indirectly inspired by Elite. Other games, such as Wing Commander: Privateer, influenced the original developer.

Vega Strike is programmed in C/C++ over the OpenGL 3D graphics API and performs internal scripting written in Python and XML. Released under the GNU General Public License, Vega Strike is free and open source software.

Vega Strike aims to insert players into a large, dynamic universe with diverse factions of varying disposition to the player and to each other, and an economy model where trade, combat and exploration are all profitable. Financial gains allow the player to buy upgrades and/or better vehicles, thus enabling him/her to advance into more dangerous and profitable missions. The player can have varying levels of relations with factions. Negative relations can form if the player kills some of a given faction's ships. Positive relations can be formed if the player destroys ships that are part of an enemy to a given faction. Players can either buy and sell cargo, or accept missions from the Mission Computer, as well as talking to people in the local bar at the space station/planet. In the tradition of some precursor games, individuals of significant plot importance are often found in bars.

The existence of a universal currency, open markets, trading items of value to all or most groups, and widespread technologies allows the player to do business practically everywhere and buy from anyone. There is also a campaign in the game which assigns certain missions for the player, following various paths within a story-graph. The player can continue playing the game after the campaign is finished.

To travel quickly to and from different planets/space stations in the same system, the SPEC system is used. It multiplies the engine speed of the player's spacecraft, causing the ship to reach high speeds, allowing the player to quickly travel to different locations in a solar system. However, the number of times it multiplies the engine speed is limited by gravity: The closer the player's ship is to a planet/space station, the less the speed is multiplied. After the player waits, and gets farther away from the gravity of the planet/station, the SPEC drive will “ramp up”, and the player's ship will stretch and star streaks will appear, until the player's spacecraft slows down due to gravity, or the player deactivates the SPEC drive.

To travel to different star systems, the player needs to go to weak points in space known as jump points, as well as buying a jump drive in advance. When the player equips his/her ship with a jump drive, the player needs to go to a jump point. When the player's ship is close enough to the jump point, the player can activate the jump drive, and "jump" to another solar system in a few seconds. In typical solar systems, there is an assortment of jump points, each point leading to another system. The player may have to go through multiple systems/jump points to get to the destination system. For missions that span across multiple systems, the instructions for which jump points to go to are displayed on the HUD, but if the player wants to reach an area regardless of any missions, he/she can use the navigation computer to plot the correct course.

Cargo: Transportation of items of the most diverse kinds, ranging from foodstuffs to political prisoners—a dangerous trade, as authorities will detect illegal cargo and pirates will attempt to pry it off unsuspecting haulers.

Bounty: Players are advised to be careful in their choice of targets, as every faction has their own friends and enemies.

Patrol: A number of targets within a system must be scanned in detail by visiting each in turn.

Clean Sweep: Similar to patrol, but any hostiles encountered on the way must be eliminated.

Rescue: A player must rescue a downed pilot, and he/she will be rewarded with credits. The player must proceed to a location, tractor the pilot's escape pod in and carry him to a destination planet. However, the escape pod is usually in a battle zone, and the player is warned to exercise caution in these missions.

Vega Strike includes a variety of upgrades for the player's ship. As the player makes more money, he/she can use it to buy upgrades to improve the spacecraft’s performance. Upgrades include repair, repair systems such as the Repair Droids, Reactors for your spaceship (Better reactors allow the spacecraft to use better weapons and also fly longer distances in your ship with the SPEC system engaged), energy shields and hull upgrades (to make the spacecraft stronger against attack), weapons such as lasers and missiles, maneuverability enhancers (like mult jet turn enhancers which increase the ship’s turning rate), and miscellaneous upgrades such as adding extra cargo space, fuel, cloaking devices (which make the ship invisible visually and undetectable by radar/sensors) and ECM systems (anti-missile countermeasures). Every spacecraft can only carry a limited amount of upgrades, as they all have a maximum upgrade capacity.