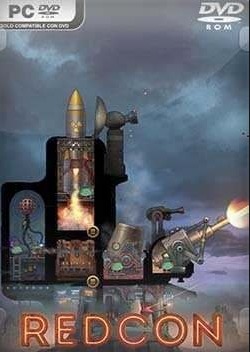 Redcon - Strike Commander (styled as REDCON) is a 2016 real-time strategy video game developed by Hexage. It is inspired by the Japanese anime film Memories.

The player controls a fort(later progressing to "Fortress"-type fortifications) armed with cannons. The player's task is to destroy an enemy's fort/fortress without being defeated. Weapons and facilities can be upgraded and configured between battles.

There are numerous weapons and facilities in-game. Most weapons are artillery cannons that fire shells of various sizes and densities, with accuracy based on the accessibility of the target. Some weapons act as launch pads and fire different types of missiles, such as explosive, toxic, and fire, or as silos and fire ICBMs. A few fire energy weapons that use power instead of ammunition, with heightened accuracy. Facilities mainly do passive utility jobs, such as providing defense to the fort/fortress or adding increased accuracy to weapons, although a few do active jobs, such as upgrading soldier weapon type and armor, or activating a sleeper cell in the enemy fortress.

The player also controls soldiers, who are the crew of the fort/fortress. They fulfill many roles, from intelligence officers to pilots to engineers. The soldiers repair damaged friendly structures, destroy enemy structures, and shoot enemy soldiers(red soldiers shoot yellow soldiers, and vice versa) in the same structure as them. Soldiers can also operate machinery and speed up or improve their actions, even though it is not strictly necessary for them to do so(although some facilities require soldiers to operate, such as Clandestine Operations, which requires a designated "Intelligence Officer" to run, or the Charon Impact-Landing ICBM, which needs 1-2 "pilots" to launch). The soldiers can also infiltrate enemy fortifications via airship, sleeper cell, or, memorably, by rocket. Soldiers use six tools during the game, with two upgraded variants. The four most commonly used are the hammer, which repairs structures, the jackhammer, which destroys enemy structures, the telescope, which improves accuracy, and the rifle, which is used in infiltration combat(the rifle can be upgraded into the machine gun variant later in the game). The two less commonly used are the phone(Intelligence Officer, Clandestine Operations) and the Control Room(Engineer, OMEGA Capital Destroyer). The Control Room has a very rare yellow variant(Engineer, Kranz Cannon). There is a seventh tool, known as the "Facility Controls," which is always hidden by the soldiers' back when in use.

Redcon is set in a world where World War I, referenced to as the "Great Unification War" in-game, never ended. A dictatoral state simply called The Empire State leads a war against a rebel nation named Krux, after their leader, the traitorous Master General and former mentor to the player, Kranz Krux(later into the game, Krux's nemesis, Furher Adler Grimm, calls him "Franz"). The protagonist of the game is Strike Commander(In full named "Strike Commander Triumphant"), who is tasked by leading the offensive against Krux.

Redcon has received generally positive reviews from critics. Rob Rich of Gamezebo gave Redcon 4 out of 5 in his review. He praised the game for its visual style and gameplay. Rich likened the game to FTL: Faster Than Light. He criticised lack of tutorial for some features and "lackluster default base layout." Thomas Olson praised the game for its gameplay that gives more challenge than what would be expected from mobile game. He criticised that graphics in Pc version should be more polished. He also praised amount of content that include over 100 missions.

Steve Lichtfield reviewed the Windows Phone version of the game. He praised it, written that he has "never seen such superlative animation and atmosphere in a mobile game." He also praised the gameplay but criticized that "the back story was confusing."