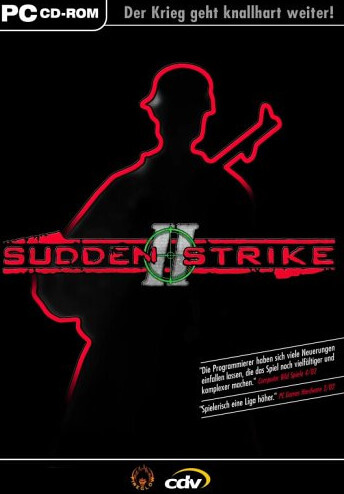 Sudden Strike 2 was also developed by Russian developer Fireglow and published by CDV and was released in 2002. The game has since undergone minor changes in its game engine and now features a higher resolution setting and other graphical changes. The campaign still involves the Soviets and Allies, against the Germans and a new country, Japan. While striving for historical accuracy, the missions are mostly fiction. The American missions are in the Rhine regions and tend to involve 'borrowing' war equipment from the German army rather than using their own tanks and other weapons. The British missions revolves around the actual events at Wolfheze and Arnhem and the attempted capture of the bridge. The Japanese missions are centered along the lines of tropical jungle warfare and the use of tanks is somewhat limited whereas the Soviet campaign is based on the capture of the city of Kharkov and other battles along the Dniepr river waged by the Soviet Red Army.

The revamped engine allowed for massive battleship control as well as trains. The ability to command airfields and deploy and control reusable aircraft was also introduced. Aircraft like the fighter planes, have a problem where after take off, they don't seem to land making some missions with aircraft a burden due to poor controls after take off.

In the German market, Sudden Strike 2 debuted at #7 on Media Control's computer game sales chart for the month of May 2002. It climbed to second place in June, before dropping to ninth, 12th and 20th places for the following months, respectively. According to publisher CDV Software, Sudden Strike 2 reached global sales of roughly 250,000 units by the end of 2002, including 70,000 units in the German market.