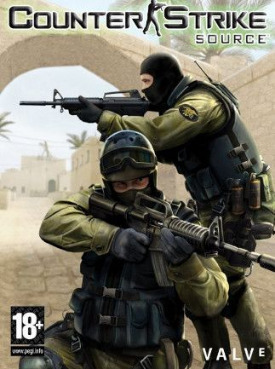 Counter-Strike: Source is a first-person shooter video game developed by Valve and Turtle Rock Studios. Released in November 2004 for Microsoft Windows, it is a remake of Counter-Strike (1999) using the Source game engine. As in the original, Counter-Strike: Source pits a team of counter-terrorists against a team of terrorists in a series of rounds. Each round is won either by completing an objective (such as detonating a bomb or rescuing hostages) or by eliminating all members of the enemy team. The game was initially bundled with all retail and digital copies of Half-Life  before being released standalone.

Counter-Strike: Source retains its team-based objective-orientated first-person shooter style gameplay. The aim of playing a map is to accomplish a map's objective: defusing the bomb, rescuing all hostages, or killing the entire opposing team. The ultimate goal of the game is to win more rounds than the opposing team. Once players are killed, they do not respawn until the next round, though this depends on which server people play on. This gameplay feature distinguishes Counter-Strike from other first-person shooter games, where players respawn instantly or after a short delay.

Shooting while moving dramatically decreases accuracy, and holding the trigger down to continuously shoot produces severe recoil. The severity of damage induced by weaponry is dependent upon the specific locations of hits, with hits to the head being most lethal and shots which make contact elsewhere causing lesser loss of health. Damage is also affected by the distance, and if the target wears protection.

Counter-Strike: Source was initially released as a beta to members of the Valve Cyber Café Program on August 11, 2004. On August 18, 2004, the beta was released to owners of Counter-Strike: Condition Zero as well as those who had received a Half-Life 2 voucher bundled with some ATI Radeon video cards. The game was included with Half-Life 2 bundles, which were released on November 16, 2004.

On October 11, 2006, Valve released an experimental update entitled Dynamic Weapons Pricing. Under this system, item prices are determined based on their demand the previous week.

On March 5, 2010, Valve Corporation announced the release of games from its first-party library, including games from the Counter-Strike series, for Mac OS X. The ports were slated for release in April 2010. Valve employed Hidden Path Entertainment to provide support on updating Counter-Strike: Source. On May 7, 2010, Valve released an update that includes new features and functionality developed in collaboration with Hidden Path Entertainment. These include 144 (now 146) new achievements, a new domination and revenge system, similar to that of Team Fortress 2, player stats, an upgrade to the Source engine and more. On June 23, 2010, Valve released the beta to the public alongside the promised OS X version. On February 5, 2013, Valve released a port of Counter-Strike: Source for Linux.

Counter-Strike: Source was met with positive reviews from professional critics. Metacritic, a review aggregator website, awarded Source a rating of 88 out of a possible 100 based on 9 critic's reviews. However, Source received some criticism by the competitive community, who believed that the game's skill ceiling was significantly lower than that of Counter-Strike 1.6.