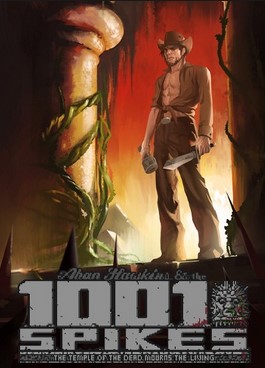 1001 Spikes is a platform game developed by 8bits Fanatics and Nicalis, and published by Nicalis. Originally named Aban Hawkins & the 1001 Spikes, the game's objective is to escape a vast terrain and struggle to reach for victory without being impaled by spikes and many other disasters. Throughout the multiple travels, the game gets increasingly challenging, especially having to dodge falling stones and much more.

Jim Hawkins, a world-renowned archaeologist, has been lost within the frozen tundra of Antarctica. Before his disappearance, his daughter Tina is left with a map to the forgotten ruins of South America. Together with her estranged brother Aban, they explore the temple and try to retrieve their father's legacy.

IGN gave the game an 8/10, favoring its abundance of content and exhilarating disasters, while showing disappointment of the increasing repetition of the game as the levels advance.