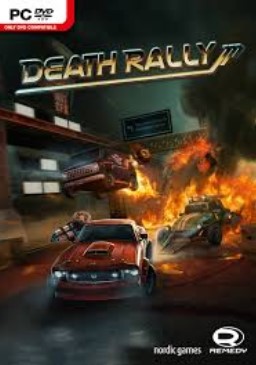 Death Rally is a vehicular combat racing video game developed by Remedy Entertainment, published by Apogee Software and distributed by GT Interactive. Originally known as HiSpeed during development, it was released on 7 September 1996 for MS-DOS. In the game, the player starts with $495 and a weak car named Vagabond (based on the VW Beetle), and must compete in deadly races where all cars are armed (although a game without guns is an option). The player wins money by finishing in front positions, collecting money bonuses during the race, fulfilling missions and destroying other cars. The ultimate goal of the game is defeating the "Adversary", the undisputed king of Death Rally, in a one-on-one race.

In October 2009, Remedy updated Death Rally with compatibility for Microsoft Windows and re-released the game as freeware. A remake of the game was developed by Remedy in cooperation with Mountain Sheep and Cornfox & Brothers. The remake was released for iOS in March 2011, for Android in April 2012, for Windows in August 2012, and for Fire OS in September 2012.

Each car can be equipped with a number of upgrades that increase defensive capabilities (armor), handling (tires) and speed (engine). While the default chain gun cannot be upgraded on any car, better cars are available for purchase, with default guns that have stronger firepower. The six cars available, from weakest to strongest, are the Vagabond (the starting car), Dervish, Sentinel (which is the best car available in the shareware version), Shrieker, Wraith, and Deliverator. Additional power-ups can be purchased in the Black Market. These include bumper spikes, land mines and rocket fuel. Before each race, the player can also ask for a loan and/or bribe a mechanic to tamper with the car of the highest-ranked opponent in the race (with the exception of the Adversary's car); this causes a random amount of damage from 25% to 49%. Reaching 1st place on the leaderboard allows players to take on the game's final racer, the Adversary, who drives a souped-up Deliverator with very powerful miniguns. Defeating the Adversary means that players become the new champion of Death Rally.

In May 2009, programmer Jari Komppa contacted Remedy and volunteered to prepare an open-source release of Death Rally. Since releasing the game as open-source could not be agreed upon, Komppa instead started working on porting the game to Windows. Based on Komppa's work, Remedy released Death Rally for Windows as proprietary freeware on 20 October 2009. The re-released version does not support multiplayer network games because the original code used for IPX networks would have been too expensive to adapt to the Windows architecture.

An article chronicling Komppa's work was printed in an April 2010 issue of Game Developer magazine and later posted online.

A full remake of the game was developed by Cornfox & Brothers and its parent Mountain Sheep, and was released by Remedy Entertainment for iOS and Android on 31 March 2011. The remake includes in-game cameo appearances from various different game characters, including Barry Wheeler from Alan Wake, John Gore from Minigore and Mighty Eagle from Angry Birds. Duke Nukem also appears as an opponent, as he did in the original game. By December 2011, the remake had been downloaded 1.8 million times, recouping its eight-month development costs in three days.

GameSpot's Chris Hudak called the original game "simply the best top-down racer to come along in years, maybe even ever." A Next Generation critic commented, "Once again Apogee reminds us shareware can be fun. Death Rally is a simple, playable, enjoyable combat racing game with a retro top-down perspective and a whole lot of action." He particularly praised the numerous ways of destroying opponents and the many humorous touches.