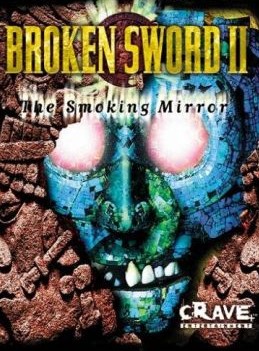 Broken Sword II: The Smoking Mirror is a point-and-click adventure video game originally released on Microsoft Windows and PlayStation in 1997. It was re-released on Microsoft Windows, OS X and iOS as a remastered edition in 2010 and on Android in 2012. It is the second installment in the Broken Sword series, and the first game in the series that does not follow the Knights Templar storyline. The player assumes the role of George Stobbart, a young American who is an eyewitness to the kidnapping of his girlfriend Nicole Collard.

The game was conceived in 1997 by Revolution. Though serious in tone, The Smoking Mirror incorporates some humour and graphics animated in the style of classic animated films. It was the fourth and last game built with the Virtual Theatre engine, which was used to render the locations of the game's events.

Unlike the first Broken Sword game, which garnered critical acclaim, The Smoking Mirror received mixed to positive reviews, mostly for not living up to its predecessor. Nevertheless, it was a commercial success, selling 750,000 copies by August 2000. Revolution released a remastered version of the game in 2010, which unlike the original version, received highly favorable reviews from critics.

Broken Sword II: The Smoking Mirror is a 2D adventure game played from a third-person perspective. Via a point-and-click interface, the player guides protagonist George Stobbart through the game's world and interacts with the environment by selecting from multiple commands, while Nicole Collard is also a playable character in selected portions of the game. The player controls George's movements and actions with a mouse (PC and PlayStation), or a gamepad (PlayStation). Player can collect objects that can be used with either other collectible objects, parts of the scenery, or with other people in order to solve puzzles and progress in the game. George can engage in dialogue with other characters through conversation trees to gain hints of what needs to be done to solve the puzzles or to progress the plot. The player uses a map to travel, and new locations are added to it as the story unfolds. By right clicking on an object, the player gets a description and clues. The player character's death is possible if the player makes a wrong decision.

Six months after the events of The Shadow of the Templars, protagonist George Stobbart and his girlfriend, Nicole Collard, visit an archaeologist named Professor Oubier to learn about a mysterious Mayan stone Nicole uncovered while researching a newspaper story. At Oubier's home, they are ambushed by two Central Americans, who kidnap Nicole, tie George to a chair and set the building ablaze. George unties himself and puts out the fire. He contacts Andre Lobineau, who reveals that Nicole had suspected that something would go wrong and had left the stone with him. Lobineau tells him of a gallery owner who can tell him more about Mayan art. George discovers that Oubier supplies the gallery with Mayan artifacts, which he imports through a company named Condor Transglobal. Following this lead, George finds the two Central Americans who kidnapped Nico. One of them, whose name is later revealed to be Pablo, is shown threatening and berating the other (later revealed to be called Titipoco). George knocks Pablo unconscious and discovers that Condor Transglobal has links with Quaramonte City in Central America. He also frees Titipoco, who had been manacled by Pablo. George finds Nico, who reveals that, while trying to expose a drug ring run by a man named Karzac, she was sent the stone instead, prompting her to arrange the appointment with Oubier.

The two escape the warehouse and retrieve the Mayan stone from Lobineau. Afterwards, they go to Quaramonte City in hopes of finding Condor Transglobal. They find the city under dictatorial rule by 'Madame La Presidente' Grasiento, and learn that the town contains no Condor Transglobal offices. The two meet Professor Oubier, who is talking to the chief of police, Raoul 'The General' Grasiento, about a mysterious chart. George confronts Oubier about his girlfriend's abduction, but the professor claims he knows nothing, and that he has not been in Paris recently. George decides to help a CIA agent, Duane, free a local agitator, Miguel, from jail by distracting General Grasiento. Afterwards, he prepares to detonate the jail wall but is arrested in the process. George gets Duane to tie a rope to the bars and pull the wall down with his truck, alerting General Grasiento. Miguel escapes, and Nicole and George flee down river on a boat. However, the boat sinks after being attacked by a helicopter.

George wakes up the next morning on the river bank, and finds a treehouse belonging to a Christian missionary named Father Hubert. Hubert has been nursing Nicole back to health, but she has suffered a snakebite and requires special medicine. He takes George to the local Mayan village, as he believes the village Shaman will be able to help. George shows his Mayan stone to the shaman, who explains that, hundreds of years ago, Mayan shamans had trapped the god Tezcatlipoca inside a mirror. However, he was so powerful that he would inevitably escape, so they created three stones that contained the power to keep him imprisoned. Before they could be put in place, they were stolen by explorers: one by a Spanish pirate named Captain Ketch, who hid it in the Caribbean; one by an English ship, which took it to England; and one by Spanish explorers, who took it back to Spain. The third of these stones was in Nico's and George's possession. George returns to the treehouse and cures Nicole with medicine from the shaman. Shortly thereafter, the two separate to find the two remaining stones.

Nicole tracks a stone down to a museum in London, England, where she encounters but does not recognize Professor Oubier. After he leaves, the stone is discovered to be missing and the museum is locked down. Nicole escapes via an abandoned subway station and finds Oubier on a boat in the Thames with Karzac. Nicole witnesses Karzac killing Oubier, and then sneaks in, takes the stone and escapes. Meanwhile, George tracks the remaining stone to a small museum in the Caribbean. Following subtle clues left by Captain Ketch, George learns that the stone was left on the nearby "Zombie Island". George explores Zombie Island and finds that a butchered remake of Treasure Island is being filmed there. He poses as a stuntman to gain access to the place where the stone is being kept, but gets captured by Pablo and his men to be used as a sacrifice to Tezcatlipoca. Nicole travels back to Quaramonte and saves George; together with Titipoco they enter Tezcatlipoca's pyramid. As they reach the central room, Karzac frees the ancient god there. However, Tezcatlipoca promptly kills Karzac. President Grasiento appears and attacks Titipoco, and their struggle sends them over a cliff. Raoul, realizing that he is expendable to his mother, chooses to save Titipoco. The protagonists place the stones into their respective slots, which causes Tezcatlipoca to be pushed back into the mirror. George and Nicole briefly celebrate and the final cut-scene fades into the credits.

All games from the serie "Broken Sword"