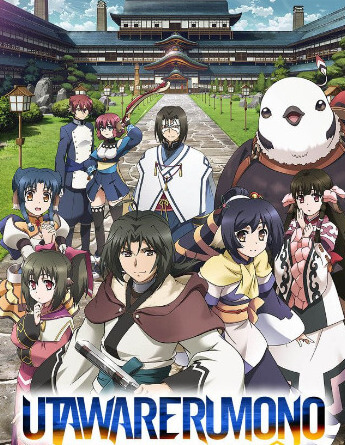 Utawarerumono (Japanese: うたわれるもの) is a Japanese adult tactical role-playing visual novel developed by Leaf, which released in April 2002 for Microsoft Windows. It was ported to the PlayStation 2, PlayStation Portable, PlayStation 4 and PlayStation Vita. Two Internet radio programs based on Utawarerumono aired on the Oto Izumi broadcast station. Three manga adaptations were published by ASCII Media Works. A 26-episode anime adaptation aired in 2006 and was licensed in North America by Funimation. Three OVA episodes were later produced by Aquaplus and Chaos Project, released between 2009 and 2010.

Several Utawarerumono drama CDs have been produced by Lantis. Four different comic anthology series have been published by DNA Media Comics, Ohzora Shuppan, and La Porte. A sequel for the PlayStation 3, PlayStation 4 and PlayStation Vita titled Utawarerumono: Mask of Deception, was released in Japan in September 2015, and worldwide in May 2017. An anime series based on Mask of Deception, known as Utawarerumono: The False Faces, premiered in October 2015. The final chapter of the series, titled Utawarerumono: Mask of Truth, was released in Japan in September 2016, and worldwide a year later. The second and third games were ported to Microsoft Windows in January 2020.

Much of Utawarerumono's gameplay requires very little interaction as most of the duration of the game is spent simply reading the text that appears on the game screen, which represents either dialogue the various characters or the inner thoughts of the protagonist. At times, the player will come to a "decision point" where he or she is given the chance to choose from a single or multiple options. Unlike many other visual novels, these choices do not affect the final outcome of the story. The time between these decision points is variable and can occur anywhere from a minute to much longer. Gameplay pauses at these points and depending on which choice the player makes, the plot will progress in a specific direction. As game progresses, the player will come across sex scenes depicting the protagonist, Hakuoro, and various female characters having sex or related activities.

Utawarerumono features a tactical role-playing battle system that centers on the player moving a group of characters through a square-based grid during turn-based battles in order to achieve an objective. The objective of the battle, displayed in the upper-right corner the screen when viewing the actions available for a specific character, consist of the player either defeating any number of enemies or moving one or all characters to a specific location. During each character's turn, the player may choose to have the character move, attack, or cast magic, of which only moving and attacking can be performed in succession, in that order. When a character attacks an enemy character, the player is given a chance to add additional attacks should he or she time his or her mouse click by clicking while a yellow circle is present on screen that disappears shortly after appearing. The number of attacks that the player can add to a character's attack is based on that character's current "technique" skill, and the maximum varies based on the character. After adding a certain number of attacks to the character will perform a special finishing attack should they have the required abilities. As characters defeat enemies and participate in battle, they gain battle points at the end of battle which are used to "pay" for increasing the character's abilities.

Utawarerumono is a story centering around the masked protagonist, Hakuoro, who one day is found by a family of two girls and their grandmother in a nearby forest close to their village. He is badly injured and is soon found to have amnesia, so they take him to their home and treat him until he is well again. Hakuoro is soon accepted into their village where he stays and lives with them, but before long Hakuoro finds that life in this village is being oppressed by the greedy emperor who rules over the country their village resides in. Soon after, these negative actions taken towards their village result in him leading a rebellion against the emperor of the country which later lands him to become emperor of a vast new country which is named Tusukuru, after the grandmother of the two girls who helped save his life.

After becoming emperor and things begin to calm down, Hakuoro soon finds out that peace is hard to maintain and finds himself constantly in battle in order to protect the peace of his country and his people. Eventually, he is led into many bloody battles in order to fight for the freedom of all those residing in Tusukuru. Along the way, Hakuoro meets several other strong warriors from several other countries and tribes who are fully accepted into Hakuoro's growing family. Many moments of hardship and laughter ensue as time continues but with Hakuoro leading the way, all others are confident in his ability to lead.

The story's genre is at first a fantasy-style story with heavy Ainu influence, though later develops science fiction themes towards the end. It first appears to take place in a fantasy world full of magical beings and new species of humans, but it is later revealed that it takes place in Earth's distant future.