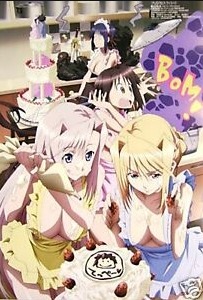 Princess Lover! (プリンセスラバー! Purinsesu Rabā!) is a Japanese visual novel and the first title developed by Ricotta. It was first released as an eroge for Microsoft Windows on June 27, 2008, in both limited and regular editions, which was followed by an all-ages release for the PlayStation 2 on January 28, 2010. The gameplay in Princess Lover! follows a linear plot line which offers pre-determined scenarios and courses of interaction, and its story focuses on the appeal of the four female main characters.

Princess Lover! has received several transitions to other media. The game was first adapted into three light novels written by Utsusemi and illustrated by Hyūma Kitsuhi. It was then followed by two manga adaptations: the first, illustrated by Naoha Yuigi, began serialization in Media Factory's Media Factory Mobile! service on March 20, 2009; and the second, illustrated by Yū Midorigi, began its serialization in the manga magazine Comic Valkyrie on July 27, 2009. An anime adaptation produced by the animation studio GoHands also began its broadcast in Japan on July 5, 2009, and it was later followed by other networks in the same month. An Internet radio show has also been produced to promote the anime adaptation, and began its broadcast on July 3, 2009. A two-part adult OVA series was released in late 2010.

The gameplay in Princess Lover! requires little interaction from the player, as most of the duration of the game is only spent on reading the text that appears on the lower portion of the screen, representing either dialogue between characters, or the inner thoughts of the protagonist. Every so often, the player will come to a "decision point", where he or she is given the chance to choose from multiple options. The time between these points varies and can occur anywhere from a minute to much longer. Text progression pauses at these points and depending on the choices that the player makes, the plot will progress in a specific direction. There are four main plot lines in the game that the player will have the chance to experience, one for each of the heroines in the story. To view all of the plot lines, the player will have to replay the game multiple times and make different decisions to progress the plot in an alternate direction.

Arima Teppei lost his parents in a traffic accident. His grandfather Isshin adopted him and ordered him to succeed the head of Arima Group Corporation. At Shuuhou Gakuen, a high school only for wealthy students, Teppei's new life as a celebrity starts.