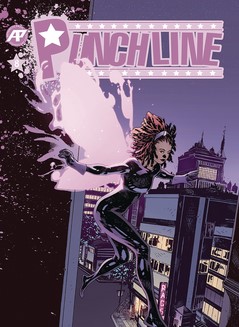 Punch Linea is a visual novel adventure video game developed by 5pb., based on the anime television series of the same name. It was published for the PlayStation 4 and PlayStation Vita by 5pb. in Japan in 2016, and is planned to be published by PQube in North America and Europe in 2018. A Microsoft Windows version was planned for release on August 31, 2018 for Europe and September 25, 2018 for North America, but was later delayed to 2019.

The player controls Yuuta Iridatsu, a ghost who seeks to return to his body, and solves puzzles while haunting a house and using poltergeist abilities such as possession.

The game was written by Kotaro Uchikoshi and scored by Tetsuya Komuro, with character designs by Shōta Iwasaki, all three of whom previously worked on the Punch Line anime, and was directed by Takumi Nakazawa and produced by Kazuhiro Ichikawa.

Punch Line is a visual novel adventure game in which the player takes the role of the ghost Yuuta Iridatsu, who aims to return to his body. The player haunts Yuuta's house, solving puzzles while exploring their housemates' rooms. The player can set up pranks in the rooms, which if successful advance the story and give the player access to new poltergeist abilities, such as possession and moving objects.

Punch Line was developed by 5pb., based on the anime television series of the same name, and was directed by Takumi Nakazawa and produced by Kazuhiro Ichikawa. Kotaro Uchikoshi wrote the scenario, Tetsuya Komuro composed the music, and Shōta Iwasaki designed the characters, all three reprising their roles from the Punch Line anime; the voice cast from the anime also reprised their roles for the game. The production of the 3D graphics was outsourced to the graphics studio Flight Unit. The game's opening theme, "Justice Punch, Here We Go!", was performed by Mikatan's voice actor Sora Amamiya, while the ending theme, "Bad End", was performed by the idol group Iketeru Hearts.

The story includes new material not featured in the original anime, including new mysteries and alternative endings; according to Uchikoshi, the new material approximately corresponds to ten episodes' worth of story on top of the twelve episodes of the anime.

The game was announced in June 2015, with a planned release later that year; it was eventually released for the PlayStation 4 and PlayStation Vita by 5pb. in Japan on April 28, 2016, and is planned to be released for PlayStation 4, PlayStation Vita and Microsoft Windows by PQube in Europe on August 31, 2018 and in North America on October 9. The Japanese limited edition of the game includes a Punch Line audio drama written by Uchikoshi, while the Western "Cheermancy Edition" includes an artbook, a soundtrack album, a cat collar like the character Chiranosuke's, and a rubber pigeon mask.