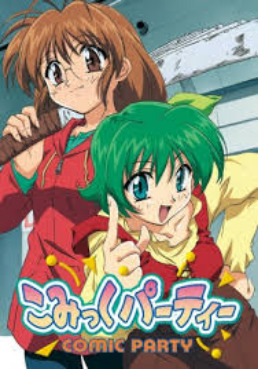 Comic Party (こみっくパーティー Komikku Pātī), sometimes abbreviated to ComiPa, is a romantic adventure and dating sim video game by the Japanese game studio Leaf. It was first released on May 28, 1999 for Windows with adult content, but re-released with it removed for the Dreamcast, Windows, and PSP. The main focus of the game is the creation of various dōjinshi by the player's character, during which there are varied opportunities to interact with a cast of girls.

Comic Party is inspired from the real world event of Comiket (Comic Market) held in Tokyo each summer and winter. This is a convention where various artists gather together to share both parody, homage, and original work. Since the series was inspired by Comiket, it comes as no surprise that the "Comic Party" convention also takes place in the same building as Comiket, the Tokyo Big Sight convention center near Ariake, Tokyo.

Comic Party has spawned both a manga (illustrated by Sekihiko Inui) and an anime series since its inception, as well as a Dreamcast version of the original PC game which added a new character (Subaru) and removed the pornographic elements (reverse-ported to Windows, that version is called "Comic Party DCE"). Many artbooks, figures, and fan-made homages have been produced for it.

The anime series was licensed in North America by The Right Stuf International and the Sekihiko Inui's manga is licensed by Tokyopop. Comic Party Anthology Comic, a related manga originally published by Ohzora Publishing, is published by CPM under the title "Comic Party: Party Time", which is a series of doujinshi anthologies featuring stories by independent manga artists set in the Comic Party universe. Diverging frequently from Comic Party canon, this offshoot manga series includes more yaoi elements than the original materials. A more recent anime series, Comic Party Revolution, came out in 2003.

The game was ported to the PlayStation Portable (PSP) as Comic Party Portable on December 29, 2005. Promotional videos show that the Comic Party Revolution character designs are used, rather than the original designs from the Windows and Dreamcast games and the first anime series. Characters from Comic Party are featured as partner characters Aquapazza: Aquaplus Dream Match, a fighting game developed by Aquaplus with characters from various Leaf games.

Comic Party is a point-and-click first person perspective dating sim game. It is the player's task to decide the schedule of the main protagonist, Kazuki Sendō, as he prepares for the Comic Party convention that takes place once a month. How fast Kazuki can complete his dōjinshi, how many copies he can sell at each convention, and what girl he is able to date depends on the player's choices. Only one action can be chosen on each weekday because Kazuki must attend college during the day, and two actions can be chosen on Saturday and Sunday. It is only on the weekend where the player is given the choice to leave the house and contact the girl the player wishes to pursue.

During the course of game, the protagonist will come in contact with other characters. These meetings composes mostly of text of the dialogue and actions that happen during the interactions. At certain points of the conversation, the player will be asked to choose between two or more actions that can affect the feelings of that person you are interacting with and can lead to other events.

The game begins on April 1 and ends on March 31 the next year. The ending depends on whether the player succeeds in winning a girl's heart. Although the player does not have to win a girl's heart to reach the end of the game, if the player fails at completing their monthly dōjinshi before the deadline, the game will end early.

Early April, Kazuki Sendō is invited by his friend, Taishi Kuhonbutsu, to come with him to Tokyo Big Sight. He is surprised to see thousands of people waiting in line to get in. Apparently they are at Comic Party, a giant dōjinshi convention. Once inside, Kazuki meets some of the dōjinshi artists and is surprised to find himself enjoying their work. Taishi convinces Kazuki to draw dōjinshi after their visit because he recognizes Kazuki's skill as an artist, but Kazuki's childhood friend Mizuki tries to talk him out of it because she believes otakus are smelly, dirty, and disgusting. Her reasoning does not help because Kazuki already made up his mind and begins to draw his first dōjinshi.