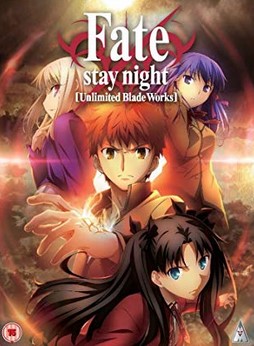 Fate/stay night (Japanese: フェイト/ステイナイト Hepburn: Feito/Sutei Naito) is a Japanese visual novel developed by Type-Moon, which was originally released as an adult game for Windows. A version of Fate/stay night rated for ages 15 and up titled Fate/stay night Réalta Nua (Irish for "new stars"), which features the Japanese voice actors from the anime series, was released for the PlayStation 2 and later for download on Windows as a trilogy covering the three main story lines. Réalta Nua was also ported to the PlayStation Vita. The plot focuses on a young mage named Shirou Emiya who becomes a warrior in a battle between "Servants" known as the Holy Grail War. Through each route, Shirou bonds with a heroine and confronts different mages who participate in the war.

A manga series adaptation by Datto Nishiwaki was serialized in Kadokawa Shoten's Shōnen Ace magazine between the February 2006 and December 2012 issues. In 2007, the manga was licensed for an English-language release in North America by Tokyopop. A 24-episode anime series created by Studio Deen aired in Japan between January and June 2006. Sentai Filmworks has licensed the television series and re-released the series on DVD and for the first time on Blu-ray Disc. A film adaptation by Studio Deen was released in Japanese theaters on January 23, 2010. A second anime television series, Fate/stay night: Unlimited Blade Works, was produced by Ufotable and aired between October 2014 and June 2015, following the game's second route as opposed to the first. A second manga adaptation began in 2015 focusing solely on the third route. A film trilogy will adapt the Heaven's Feel route of the visual novel, with the first film, titled presage flower, released in 2017, the second film, titled lost butterfly, released in 2019, with the final film, titled spring song planned to be released in spring 2020.

A spin-off magical girl manga series, Fate/kaleid liner Prisma Illya, began serialization in 2012 and has received multiple anime television series. Three fighting games have been released: Fate/unlimited codes for arcades and PlayStation 2, Fate/tiger colosseum and its sequel Fate/tiger colosseum Upper for PSP. A PSP RPG titled Fate/Extra was released on July 22, 2010, and a sequel and companion game, Fate/Extra CCC, was released on March 28, 2013. An online RPG titled Fate/Grand Order was released on Android on July 29, 2015, followed by an August 12 release on iOS; an anime film adaptation by Lay-duce was released on December 31, 2016 with sequel adaptations by CloverWorks and Production I.G. in production.

Fate/stay night's gameplay requires little interaction from the player as most of the game's duration is spent on reading the text that appears, representing either dialogue between the characters, narration, or the inner thoughts of the protagonist. Often, players will come to a "decision point" where they are given the chance to choose from options displayed on the screen, typically two to three at a time. The time between these decision points is variable and during these times, gameplay pauses until a choice is made that furthers the plot in a specific direction. There are three main plot lines that the player will have the chance to experience, one for each of the heroines in the story. To view all three plot lines, the player will have to replay the game multiple times and choose different choices during the decision points to progress the plot in an alternate direction. When interacting with the heroines with the routes, an "affection meter" is created which is raised by giving them an answers that pleases them. Depending on the affection the player has achiveved, a "True Ending" can be unlocked in the Realta Nua version of the game.

There are multiple ways in which the player can lose the games involving Shirou's death or a decision that causes the heroine to be murdered. Should this happen, the player is taken to an area called the Tiger Dojo (道場 イ ガ ー 道場 Taigā Dōjō) where Taiga Fujimura and Illyasviel von Einzbern give the player hints about what they should in order to survive in the next attempt to complete the game.

The story revolves around Shirou Emiya, a hardworking and honest teenager who unwillingly enters a to-the-death tournament called the Fifth Holy Grail War, where combatants fight with magic and Heroes throughout history for a chance to have their wishes granted. Orphaned and the sole survivor of a massive fire in Fuyuki City as a child, Shirō was taken in by a retired magus named Kiritsugu Emiya, who would die years later. His responsibility to those who died and his own salvation through his father formed a strong desire for justice and peace in him. Thus, he earnestly trains his body and minuscule ability with magic to someday greatly help others, even if at his stage people often abuse his generosity. One evening, after seeing two devastatingly powerful beings trading blows at his school with swords and spears, he is attacked, as witnesses to the Holy Grail War are generally supposed to be eliminated. Chased all the way to his home by the spear-wielding warrior Lancer, and barely able to avoid his attacks, Shirō is about to be killed when he is saved by Saber. Saber, the personification of a renowned figure in history (Arturia Pendragon in her case) created to aid participants in the War. In her supposedly accidental summoning and the appearance of the marks on Shirou's hand, his entry as a Master into the Holy Grail War is formalized.