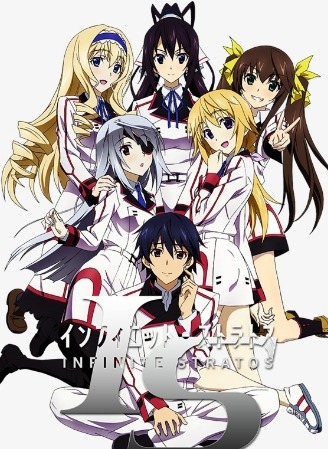 Infinite Stratos, also written as IS <Infinite Stratos> (Japanese: IS〈インフィニット・ストラトス〉 Hepburn: IS <Infinitto Sutoratosu>) is a Japanese light novel series by Izuru Yumizuru with illustrations provided by Okiura (original MF novels) and CHOCO (new Overlap novels). As of October 2013, 7 volumes have been published by Media Factory under their MF Bunko J label. From volume 8 onwards, the novels are published by Overlap under their Overlap Bunko label. A manga adaptation by Kenji Akahoshi was serialized in the seinen manga magazine Monthly Comic Alive from May 2010 to July 2012 with five volumes published under their Alive Comics imprint. A 12-episode anime adaptation by Eight Bit aired in Japan between January and March 2011, and an original video animation (OVA) episode was released on December 7, 2011. The anime is licensed by Sentai Filmworks in North America, and they released the series on April 10, 2012. A second series aired from October 3, 2013 to December 19, 2013.

In the near future, a Japanese scientist creates a high-tech powered exoskeleton called "Infinite Stratos" (IS). Possessing technology and combat capabilities far surpassing that of any other arms system, the IS threatens to destabilize the world. Faced with such an overpowered weapon, the world's nations enact the "Alaska Treaty", stating that IS shall never be used for military combat purposes, and that the existing IS technology must be equally distributed to all nations, to prevent any one nation from dominating the others. However, sometime after the IS was introduced, the society undergone a drastic change. As IS can only be operated by women, there is a shift in the power balance between men and women, where women now dominate society over men.

Ten years after the IS was initially introduced, the world has entered a new age of peace. However, a 15-year-old male Japanese teenager named Ichika Orimura changes everything. During an accidental run-in with a hibernating IS suit, it is revealed that he possesses the innate ability to operate an IS - the only male in the world capable of doing so. Seeing his potential, the Japanese government forcibly enrolls the bewildered young man to attend the prestigious Infinite Stratos Academy, a multicultural academy where IS pilots from all over the world are trained. Thus, he starts a busy high school life surrounded by girls training to become expert IS pilots. While they seem to be enjoying their thrilling school life, the danger of looming threats and enemies are never too far away.

The light novels have collectively sold 1.2 million copies as of February 2011.

The opening theme of the anime adaptation, "Straight Jet", reached No. 16, and the ending theme, "Super∞Stream", reached No. 10 on the Oricon charts. The Blu-ray disc release of its first volume sold around 22,000 copies in its first week, becoming only the sixth-ever first volume of any anime television series to reach number 1 on Oricon's Blu-ray Disc weekly overall sales chart.

Theron Martin of Anime News Network criticized the anime for its "unbelievably dense protagonist" and weak storyline, but the action sequences received praise.