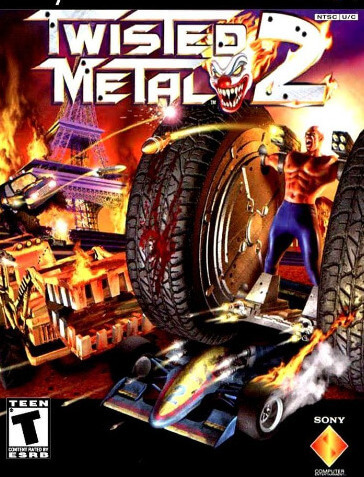 Twisted Metal 2 (known as Twisted Metal: World Tour in Europe and Twisted Metal EX in Japan) is the second and most successful game in the vehicular combat series, Twisted Metal. It was developed by the game studio SingleTrac, published by Sony, and released in 1996 for PlayStation and Microsoft Windows.

Two years after its release, Twisted Metal 2 was re-released as a PlayStation Greatest Hits game, however under the developer 989 Studios instead of SingleTrac. It was also released for download in Japan and North America on the PlayStation Network in 2007.

In concept, Twisted Metal 2 is a demolition derby which permits the usage of ballistic projectiles. Players choose a vehicle and an arena—or a series of arenas in the story mode—to engage in battle with opposing drivers. A variety of weapons are obtainable by pick-ups scattered throughout the stage. The objective of the game is to be the last remaining player. Two player duel mode makes a return from the first Twisted Metal and co-operative mode is also introduced to the series where you can fight through tournament mode with a teammate, however there is no ending if the game is completed in Co-operative mode.

In 2006, Los Angeles is in ruins and its citizens left to struggle for survival after the conclusion of Twisted Metal, a brutal contest held by Calypso, exactly one year earlier on Christmas Eve. Aboard his airship (running the ticker "CALYPSO RULER OF THE EARTH") in the skies over the destroyed City of Angels, Calypso wonders where the next Twisted Metal will take place; fourteen of the world's best drivers are already assembled to compete for whatever prize they desire. Ultimately, Calypso decides that the world itself shall serve as a battleground. In addition to the remains of Los Angeles, drivers will also battle in Moscow, Paris, Amazonia, New York City, Antarctica, Holland, and Hong Kong.

SingleTrac began brainstorming ideas for a Twisted Metal sequel in late 1995. Due to the success of the original, Twisted Metal 2 was allotted 16 months for development, much longer than the previous game.

Critics generally regarded the game as an improvement over the original Twisted Metal due to its larger, more intricate levels and better cast of characters. However, they were divided about the graphics. The four reviewers of Electronic Gaming Monthly said that the original Twisted Metal had mediocre graphics and the sequel made no improvement. GameSpot's Jeff Kitts agreed that there was no improvement but felt the graphics still held up well. Major Mike of GamePro said the graphics are better than the first game but still mediocre in absolute terms, citing bland and featureless buildings, pixelation, and breakup when close to walls, while a Next Generation critic claimed, "TM2 shows significant improvement with sharper textures, a significant reduction in clipping, and even an improved frame rate." Both GameSpot and Next Generation attested that the essential nature of the gameplay was unchanged from the original, and that no change was needed. Major Mike opined that "intense gameplay is what saves, and makes, the game - especially in the two-player head-to-head mode." Crispin Boyer wrote in Electronic Gaming Monthly that "I wasn't all that crazy about the first Twisted Metal, but this sequel is worlds better, even though it looks like the same old thing at first glance.

Twisted Metal 2 was a runner-up for Electronic Gaming Monthly's Action Game of the Year (behind Die Hard Trilogy).

Frosty Treats, a major ice cream truck company, filed a lawsuit against Sony contending that Twisted Metal 2 infringed on the company's trademarks through the use of the phrase, "Frosty Treats", as well as similarities between the video game clown, Sweet Tooth, and the company's own safety clown. In Frosty Treats, Inc. v. Sony Computer Entertainment America, Inc., the U.S. Court of Appeals for the Eighth Circuit ruled against the trademark claims because they were either too generic or were unlikely to cause confusion among consumers.