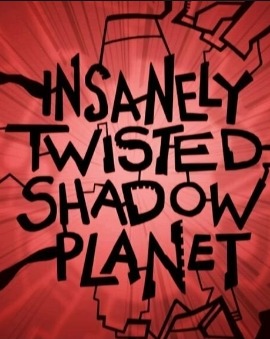 Development of the game began in 2007 and was first demonstrated in March 2011 at Penny Arcade Expo East. The game is set on an alien planet and includes exploration elements similar to Metroidvania. Insanely Twisted Shadow Planet was released on August 3, 2011. The game features music by Dimmu Borgir during cinematics; the songs "Progenies of the Great Apocalypse" (orchestral version) and "Eradication Instincts Defined" play during the game, while the trailer featured "Blood Hunger Doctrine".

Insanely Twisted Shadow Planet received generally favorable reviews for both versions of the game, Xbox 360 and PC, with Metacritic giving the game an aggregate review score of 76/100.

Destructoid gave the game a 6 out of 10 score, noting the game as an "attempt to run in multiple directions at once and make very little ground at all" and concluding: "Sadly, great visuals do not make a great game."

IGN, praised the game's beautiful and well-conceived world, criticizing it for being too short, and gave it an 8 out of 10 rating.