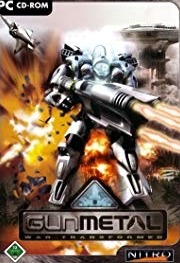 Gun Metal is a 3D shooting game for the Xbox and Microsoft Windows by the now defunct Rage Software Limited.

Gun Metal allows players to pilot a futuristic mech which can transform into a plane. The game is based around a war (sometime in the future) on a planet called Helios, where humans have settled. Enemy spacecraft have followed them from Earth and are attempting to exterminate the colony. Project Gunmetal is a massive operation which oversaw the creation of a supremely powerful war machine. In its primary form, a walking "humanoid" mech many dozens of feet high, it possesses a range of 12 weapons and an electronic shield. At the push of a button, it transforms into an advanced fighter jet reminiscent of a modern fighter jet. It also possesses 12 weapons, ranging from napalm, pulse cannons, harpoons and rockets.

The Xbox version received "mixed" reviews according to the review aggregation website Metacritic.