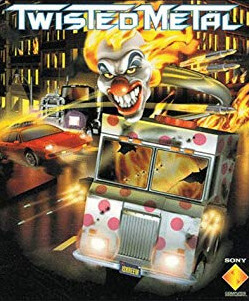 Twisted Metal is a vehicular combat video game developed by SingleTrac, produced by Sony Interactive Studios America (now 989 Studios) and published by Sony Computer Entertainment for the PlayStation. The game was released in North America on November 5, 1995, in Europe on January 13, 1996 and in Japan on November 15, 1996. The North American version was rereleased for the Sony Greatest Hits line-up on March 3, 1997. It is the first installment in the Twisted Metal series. The game's plot is centered on the titular competition in which various drivers in modified vehicles must destroy the other vehicles in an attempt to be the last one alive. The winner meets the organizer of the competition, a mysterious man named Calypso, who will grant the winner a single wish, regardless of price, size or even reality.

Twisted Metal is a vehicular combat game in which the player takes control of one of twelve unique vehicles. While in control of a vehicle, the player can accelerate, steer, brake, reverse, activate the turbo, turn tightly, toggle between and activate weapons using the game controller's d-pad and buttons. The game can be played in either the one-player mode (in which the game's story takes place) or the Duel Mode (in which two human players can select a battleground on which to compete in). In the one-player mode, the player must progress through six combat arenas of progressively increasing size and featuring progressively more opponents. To clear a level, the player must destroy all of the enemy vehicles in that level. The game lasts until all of the player's lives have expired or until all six levels have been cleared.

The player begins the game with three lives, indicated by the stacked green boxes on the bottom right corner of the screen. The length of each of the player's lives is tied to their health bar (located to the left of the life boxes), which decreases whenever the player's vehicle is damaged by enemy attacks. The player can replenish a portion of their vehicle's health bar by driving through blue ramps called "Health Stations" scattered throughout the environments. The difficulty level the game is set on determines how much of the vehicle's health is replenished and how fast the stations recharge once the player has used them. Each time the health bar is fully depleted, the player loses a life. If the last life is lost, the game ends.

Weapons play a key role in winning the game. All vehicles come with a pair of mounted machine guns. They are weak in power, but have unlimited ammunition. However, the guns can overheat if used for too long at a time, preluded by the overheat light on the bottom-right corner of the screen blinking red. When the light becomes fully red, the machine guns will cease to function and the player will have to allow the guns to cool off before they can be used again. Additional weapons scattered throughout the environments can be picked up and utilized if the player drives through them. These weapons include a variety of missiles, land mines, tire spikes and oil slicks. All vehicles can carry up to 30 weapons.

Once a year the legendary Calypso, a man who dwells beneath the streets of Los Angeles, holds the "Twisted Metal" competition. The contest takes place all around the Los Angeles area and calls upon drivers in various different vehicles to battle to the death. The contestants are selected and contacted by Calypso via an e-mail message that simply reads "WILL YOU DRIVE?" in red letters. The one driver still alive at the end of the night is granted a single wish, with no limits on price, size or, according to some, even reality.

Twisted Metal received positive reviews from critics. It received an aggregate score of 66.88% on GameRankings. Game Revolution praised the game's action and variety of the vehicles, but noted that the graphics were "a little sloppy". IGN criticized the single-player mode's short length of "just a couple of hours", but remarked that the two-player mode "more than makes up for the one-player mode's lack of length." Twisted Metal was awarded the 1995 "Game of the Year" from the editors of Electronic Gaming Monthly. The Black Widow of GamePro criticized the graphics for their static arena crowd, difficult-to-read radar, and heavy break-up, and described the music as "weak overall." However, they concluded that "Despite its flaws, this twisted game is fun." Maximum applauded the varying strengths and weaknesses of the vehicles and most especially the innovative free-roaming levels. However, they criticized that the game is much too short and concluded, "A playable game, but one which is probably destined for obscurity." A reviewer for Next Generation called it "Another showcase title for the PlayStation", and said that while the texture maps are simple, this allows the action to play out fast enough that players will rarely notice the lack of detail. He agreed with Maximum that the game is too short, contending that even players with nominal skill will reach the final stage in about two hours, but felt that the enduring fun of the two-player mode "nearly" makes up for this.

Twisted Metal was commercially successful. By 1996, Twisted Metal and Warhawk had sold over 500,000 units combined and generated some $28 million in revenue for publisher Sony. To date, Twisted Metal has sold over one million copies in the North America alone. As a result, Sony announced on March 3, 1997 that the game would be re-released as part of its budget Greatest Hits range of games.