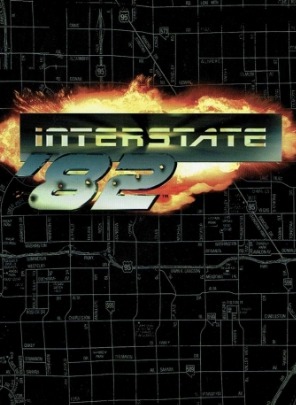 Interstate '82 is a vehicular combat video game developed and published by Activision exclusively for Microsoft Windows.

The game is set in the southwest United States in an alternate version of the year 1982, during the Reagan Administration. The game is less complex than its predecessor, Interstate '76, lacking the detailed armor and weapon management of the original. Its play-style is closer to console-based vehicular combat games like Twisted Metal, with a single health bar displaying both armor and chassis strength, as opposed to '76's armor/chassis strength system. The vehicle models have been updated to reflect the change in era, and overall, the game has a new wave feel, with several hitherto-unreleased Devo songs being on the soundtrack, as opposed to the first game's funk-inspired style.

Interstate '82 features a story-mode like its predecessor, with one new option: the player can exit his vehicle and enter another, adding some strategy to the game's storyline. Another new addition is the ability to skin the new vehicle models.

The game received a bit more mixed reviews than the original according to the review aggregation website GameRankings.

All games from the serie "Interstate"