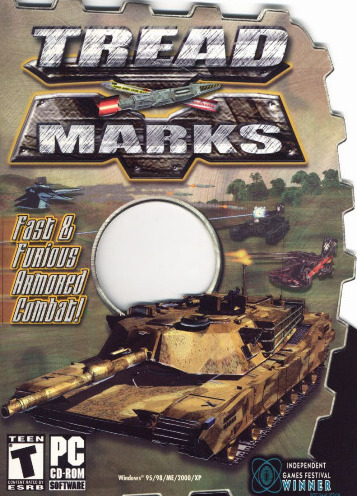 The tanks come in two varieties: steel and liquid. The steel tanks resemble real-life tanks, while the liquid types are whimsical fantasy tanks. Weapons and power-ups are scattered around the maps, and range in destructive power from light machine guns to tactical nuclear missiles.

Race mode, in which tanks must race around an off-road course while attempting to stop other tanks from completing the course. Common techniques include using the in-game weapons to attack opponents and using physical tank contact to temporarily 'push' opponents off the course.

Battle mode (deathmatch, or DM), in which the tank or team with the most kills win as soon as the global kill or time limit is reached.

Capture the Flag mode (CTF) in which there are two or more teams of tanks that compete by trying to capture one of the other team's flags.

The race and battle modes can be played in either team or single-player mode. Tread Marks can be played over a LAN, or over the Internet and includes a program for running a dedicated game server, which lists the computer it runs from on the master server. The master server in turn is operated by Longbow Digital Arts from a location in Toronto, Ontario, Canada. Many modifications can be found online, including new maps, tanks, and weapons.

The game was developed by Seumas McNally and uses OpenGL to render its 3D graphics and the Miles Sound System for positional sound. A notable feature is the in-game deformable terrain which doesn't harm performance. For instance, a nuclear missile explosion creates a huge black crater in the terrain, while its "opposite", the Matterbomb, creates a huge mountain on the terrain. For the in-game deformable terrain a Binary-Triangle Tree-based dynamic view dependent level of detail height field renderer was utilized.

In January 20, 2017 the game was released as freeware and the source code as open-source under the GPLv3 license on github.com. For enhanced cross platform portability, the Miles Sound System was replaced with OpenAL, and the platform dependent Win32 API code with SFML and Qt. A port to Linux and MacOS is in progress. In September 2017 a version for the Linux-based OpenPandora was released.

The game won the 2000 Independent Games Festival grand prize, later renamed to the Seumas McNally Grand Prize in honor of the game's lead programmer who died on 21 March 2000, after receiving the award.