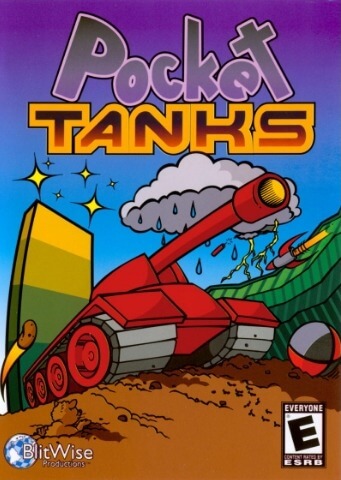 The point of Pocket Tanks, often abbreviated as PTanks or simply as PT, is to use various weapons to attack the other player's tank. Each hit scores a certain number of points, which varies based on the weapon and proximity. At the end of 10 volleys, the player with the highest points wins.

The game features a fully destructible environment, which allows player to put themselves on pedestals, in tunnels, or bunkers, allowing for the probability of strategic play. Pocket Tanks supports weapon expansion packs, players can have up to 320 different weapons in total. Network play was made available in the v1.3 release.

There are "weapon packs" available which give the player more weapon choices during gameplay. However, these expansion packs are only available to those who own Pocket Tanks Deluxe. For the PC version, there are 30 Expansion Packs available to download on the web page. All packs that include 5 weapons are free, while those with 15 have to be purchased (mobile versions only). There are 320 weapons in total, including 30 from the original game and 290 from the Deluxe Version.

Michael P. Welch from Blitwise Productions created Amiga games before he started developing PC games such as Super DX-Ball and Neon Wars. Welch developed Pocket Tanks as remake/sequel of the Amiga game Scorched Tanks and extended the game-play with modified physics, dozens of new weapons, and the ability to move the tank. The game's soundtrack was created by Eliran Ben Ishai as Impulse Tracker Module file. The first version of Pocket Tanks was released in 2001.

Version 1.3 was released in November 2007. It contains bug fixes, LAN and IP support.

Version 1.6 is currently the most recent desktop release and it includes more expansion packs to obtain. This version is available for MacOS and the Windows Desktop.

On October 26, 2001 the first version of pocket tanks was released after a beta. This version continued to be updated, adding features like network support and more weapons.

On April 15, 2009 pocket tanks was released on iPhone. This version included a new touch interface and 35 weapons to enjoy for free. The iOS version continues to be updated along with other mobile versions that were released later.

On January 9, 2013, Blitwise announced the availability of Pocket Tanks on the Windows Store. Users with desktops, laptops, and tablets running Windows 8 or Windows RT can now download the game from the Windows Store.

On March 7, 2013, Blitwise announced the availability of "Pocket Tanks" on the Amazon AppStore.

Version 2.1 added support for the latest weapon packs and fixes bugs that prevented from being playable on the Surface Pro.

Version 2.3.1 is currently the latest release of the game as of 2017 and is available for Windows Store, iOS, Amazon Appstore, and Android. Pocket Tanks is currently available on Windows, MacOS, iOS, Android, Amazon Appstore, and Windows store. The PC versions of the game lack some of the features of the mobile and Windows store version. The game is still being updated as of 2017.