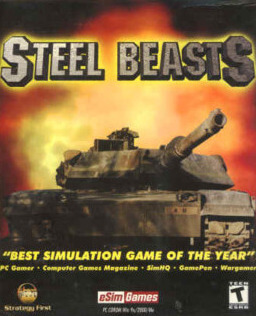 Steel Beasts is the name for a family of tank simulators created by eSim Games for Microsoft Windows.

Its subject is contemporary combined arms tactics (with emphasis on modern armoured fighting vehicles) at a company scale. As a consumer game, it is a genre mix of strategy game, action game, simulation game, and wargame of fairly complex gameplay.

Steel Beasts (more colloquially known as SB to its fans) is distinguished from other simulators by a faithful reproduction of tactical maneuvers and Fire Control Systems as well as various other military facets than when compared to other simulators. The sound samples are mostly authentic, having been recorded from some of the actual armored fighting vehicles depicted in the sim.

Customized versions of Steel Beasts have been adopted by the armies of Australia, Austria, Canada, Chile, Denmark, Finland, the Netherlands, Norway, Spain, Sweden and USA for training purposes.

Steel Beasts is a modern tank simulator that focuses on the US M1A1 Abrams and German Leopard 2A4 main battle tanks. Both machines are fully drivable and are reproduced in painstaking detail in the game. In addition to these tanks, Steel Beasts models a number of modern armored vehicles such as the Russian T-80, the German Marder, and a variety of armored personnel carriers. Steel Beasts allows the player assume the tank commander's or gunner's seat in the Abrams and Leopard 2, as well as move to an external camera view in each vehicle. The variety of units in the game (including infantry) allows for a wide range of different scenarios.

The game was announced in March 2000, and was published exclusively through Shrapnel's website.

Critical response to the original Steel Beasts was quite consistent. Reviewers were initially put off by the substandard 640×480 graphics, then highly impressed by the gameplay, immersion and the intelligent-seeming behaviors exhibited by the computerized units.

Bruce Geryk of GameSpot gave the game a rating of 8.8 out 10.