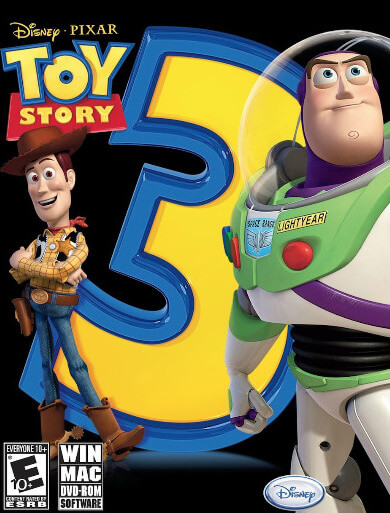 By February 2008, Disney and Pixar had rejected THQ's pitch to develop the film's video game adaptation, choosing instead to have it developed by Disney's Avalanche Software. A 10-person team from Pixar aided Avalanche in developing the game. Most of the voice cast from the film reprised their characters for the game. Toy Story 3 includes a story mode that loosely recreates the film's events, and the Toy Box mode, consisting of a western town that can be freely roamed and customized by the player. The game was well received by critics, particularly for its Toy Box mode. The game was a top-seller in the UK.

Toy Story 3: The Video Game is based on the film. Sheriff Woody, Buzz Lightyear, Jessie, and others are among toys who previously belonged to a boy named Andy. Now 17 years old, Andy has donated his toys to a girl named Bonnie before leaving for college. Three of Andy's toys – Hamm, Rex and Slinky Dog – tell Bonnie's original toys about an adventure they had prior to being donated to Bonnie. Andy's toys explain that they were donated to the Sunnyside Daycare center, run by a friendly stuffed bear named Lotso. The toys later learn that Sunnyside is a toy prison run by Lotso, who turns out to be a disgruntled ruler of the daycare toys. Andy's toys escape through a trash chute and wind up in a garbage truck, which takes them to a landfill, where they are about to be destroyed by a trash shredder. In the PlayStation 2 (PS2) and PlayStation Portable (PSP) versions, the toys are saved by Andy's Alien toys (like in the film). In the other versions, it is Woody, Buzz and Jessie who save the other toys. In addition, the PS2 and PSP versions feature only Rex telling the story, through drawings that he has created.

Toy Story 3: The Video Game is a platform video game. The game includes a story mode, which loosely recreates the events of the film; and the Toy Box mode, set within the universe of the fictional Woody's Roundup television series, which is featured in the second film, Toy Story 2.

The Wii, Xbox 360 and PlayStation 3 (PS3) versions include a multiplayer feature in both modes. Woody, Buzz, and Jessie are playable characters throughout the game. They each have their own abilities that are needed to progress through the story mode, although they play the same when in Toy Box mode. The PS2 and PSP versions also allow the player to control the Aliens and Andy's soldier toys during certain levels. The PS3 and Xbox 360 versions have eight story mode levels, while the PS2 and PSP version includes 13 levels in story mode. In the latter versions, after the player has completed a level in Story Mode, they can go back and replay it to try the two Challenge modes, which are Cube Destruction and Time Attack, that allow the player to win coins and unlock trophies. The three mini-games are Woody's Roundup (five levels), Buzz Adventures (five levels) and Aliens Escapes (two levels), based on the events of Toy Story 2. In the PSP version, the final two levels of both Woody's Roundup and Buzz Adventures, along with the two levels of Aliens Escapes, have to be purchased via the PlayStation Store as downloadable content.

Toy Box mode takes place in a western town that can be freely roamed and customized by the player. Toy Box mode features missions from Mayor Hamm, townsfolk, and other toys. Compared to the Xbox 360 and PS3 versions, the Wii, Windows and Mac OS X versions have fewer Toy Box options for gameplay and town customization, and they lack a multiplayer option. The PS2 and PSP versions exclude the Toy Box mode entirely, and also lack multiplayer.

The PlayStation 3 version of the game features exclusive content such as the ability to play as Emperor Zurg in Toy Box mode, in addition to Buzz, Woody and Jessie. Players can drive around in Zurg's custom vehicle as well as blast at enemies using his trigun. Zurg has his own set of missions, and his primary goal is to eliminate Buzz. In addition, the game also features compatibility with the PlayStation Move motion controller, and there are also downloadable mini-games designed specifically for the Move that can be downloaded for free from the PlayStation Store beginning in fall 2010.

An iOS mobile application for iPhone and iPod Touch includes two built-in games: the free Woody's Wild Ride, in which the player controls Woody while riding his horse Bullseye across 10 levels; and Toy Story Mania, which includes a set of minigames. The application also allows the player to use their iPhone or iPod Touch as a controller for the Macintosh version.