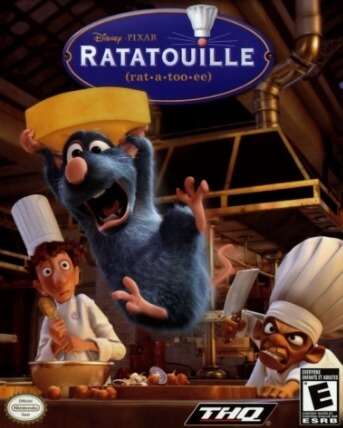 Ratatouille is a platform game based on the Pixar film of the same name. It was developed at Heavy Iron Studios and released by THQ, on June 26, 2007. Ratatouille was released on thirteen platforms: the Wii, the Nintendo DS, the PlayStation 3, the PlayStation 2, the PlayStation Portable, the Xbox 360, the Xbox, the GameCube, the Game Boy Advance, Microsoft Windows, OS X, Java Platform, Micro Edition, and mobile phones.

Similar to the plot of the movie, the game starts in a farm setting. Remy goes off with his brother Emile to retrieve apple cores for his father. On the road trip he is taught the basic skills he will need to know so that he can pass what he will face later on. After the task, the old lady living in the farm catches Remy and Emile, alerting the colony, thus forcing them to escape. Though Remy successfully escapes the shotgun-wielding woman, he gets lost in the rapids of the sewers, and he wakes up in front of Gusteau's restaurant, where the rat watches as the garbage boy, Linguini, attempts to fix the soup he accidentally ruined by throwing in a bunch of random ingredients. Remy hurries in and fixes the soup, but Linguini spots him, thus beginning a chase outside with Linguini on pursuit. After that, Remy befriends Linguini and helps him with what he is forced to do for Skinner, the head chef. The next day Remy helps Linguini cook the food for the customers while also helping his colony that he has reunited with by stealing the kitchen's food. Skinner catches Remy, and another chase begins, ending with Remy discovering a letter that proves Linguini's right to inherit the restaurant, leading to Skinner's firing.

Later, Remy helps his colony steal prized foods at the market. After that, the food critic Anton Ego, also known as the "Grim Eater," has arrived at Gusteau's for a review; one that will be important to the cooks. However, with the exception of Linguini and the rôtisseuse Colette, they all leave after finding out about Remy. Now it is up to Remy, his rat colony, Linguini, and Colette to cook for many people, including the critic Ego. Remy decides to cook Ratatouille for the night, impressing Ego. Skinner, furious by the food's delicacy, chases Remy throughout the Gusteau's restaurant, wrecking it in the process. While Remy manages to escape, the restaurant's credibility is lost due to the revelation of the rat colony's existence and is forced to close down. However, with Ego's funding, Linguini and Colette manage to open a bistro called "La Ratatouille" with Remy as its head chef.

Disney announced on November 6, 2006 that they planned a Ratatouille video game release, which would coincide with the movies. Several of the actors from the film voice their characters in the game.

Alex Navarro of GameSpot gave most versions of the game a score of 6 out of 10 and called it "a sufficient, if unfulfilling, platformer." Navarro wrote, "There's little difference to speak of between any of the older console, PC, or Wii versions of Ratatouille. The PC version predictably looks the sharpest, and the PS2 version looks the dullest, though the differences are minor all around" and said "The PC version requires a decent gamepad to play properly, and the Wii version dabbles in motion controls." Navarro said the gameplay is fine for younger players but too simplistic for older players. He said the film's cast gives solid voice work but that the missions are a bit dull and repetitive. Navarro wrote "if your kid is desperate to relive Remy's adventures for him or herself, Ratatouille isn't a bad game to rent" and also wrote "it's the sort of game that will satisfy a younger fan of the film for a few lazy afternoon hours, and then be forgotten about immediately afterward."

Justin Davis of Modojo.com gave the mobile phone version of the game by THQ Wireless a rating of 3 stars out of 5. Davis said the game appears like the game Diner Dash, but it's set in the kitchen instead of the dining area and instead of serving drinks, the player is dropping meat onto a stove, and Linguini's hands are controlled independently. Davis said the game was a "pleasant surprise" but that it was a little too short, with not enough depth. Louis Bedigian of GameZone gave the mobile phone version a score of 7.7 out of 10, and IGN gave it 7.5.

The video game won the award for the "Best Animated Video Game" award at the Annies in 2008.