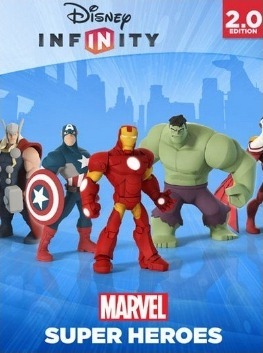 Disney Infinity: Marvel Super Heroes (also known as Disney Infinity 2.0 Edition) is an action-adventure sandbox toys-to-life video game developed by Avalanche Software and published by Disney Interactive Studios. The game features additional work by Studio Gobo and Ninja Theory. It is the sequel and successor of the 2013 video game Disney Infinity and was announced on April 8, 2014. The game was released on September 23, 2014 in North America, September 19, 2014 in the United Kingdom, September 18, 2014 in Australia and the rest of Europe for iOS, PlayStation 3, PlayStation 4, Wii U, Microsoft Windows, Xbox 360 and Xbox One,1 and for PlayStation Vita on May 9, 2015.

Featuring original story material by Brian Michael Bendis, Marvel Super Heroes includes three plots and includes characters from both Marvel and Disney properties. The main campaign is divided into three stories. The first storyline follows the Avengers as they prevent the Norse God Loki from rebuilding the Casket of Ancient Winters. The second storyline centers on Spider-Man and features him and his team tasked with the objective to stop Green Goblin's symbiote invasion. The third and final storyline concentrates around the Guardians of the Galaxy, in a plot heavily inspired by the Guardians of the Galaxy film, where the Guardians must protect Knowhere from Ronan the Accuser.

The game follows multiple plots, with each Playset having its own.

The Avengers Playset centers on Loki and MODOK attempting to rebuild the Casket of Ancient Winters, with the aid of the Frost Giants, in order to freeze New York City.

The Spider-Man Playset, which is heavily inspired by Ultimate Spider-Man, centers on Green Goblin and Mysterio cloning the Venom symbiote and launching a symbiote invasion.

Guardians of the Galaxy Playset

Disney Infinity: Marvel Super Heroes features similar gameplay to Disney Infinity. Each character can equip a "Pack" or a "Tool." Packs are items that are worn and can be equipped on a character's back, occasionally shown as some sort of backpack. Tools are items, such as rifles, that can be equipped in a character's hand. Some aspects of the game, however, have been changed. In addition to ground movement, certain characters will be able to fly and hover. The size of Toybox worlds and Playset have been increased, notably due to the inclusion of flying. Certain characters can climb walls, including the Hulk. The level cap of playable characters has been expanded from Level 15 to Level 20. Characters can be "leveled up" by collecting sparks. A "Skill Tree" has been incorporated into the game and can be used to upgrade a character's abilities. The figures from the first game will also receive additional abilities through the Skill Tree. The choices made in the Skill Tree are semi-permanent, as players have the options to reset the Skill Tree choices by resetting their character to Level 0. Some characters can jump long distances, including Hulk. Each character plays differently from another, with characters being roughly divided into two categories, Ranged and Melee. Ranged characters fight from far distances, while Melee characters fight using close combat. Signature moves can be unlocked as the player progresses. For example, Drax primarily utilizes short-ranged melee attacks to defeat enemies, while Star-Lord can use ranged pistols. As characters are leveled up, new abilities will be unlocked. Iron Man's ground slam and Hulk's Thunderclap abilities can be unlocked once players have enough Skill Points. Characters' upgrades differ. Iron Man can upgrade his blasting capabilities, while Thor and Hulk can upgrade their strength, using the new Special Skills and Combat system. All upgrades, skills and progress applied to the character will be saved to the figurine. The freeform unlock system in Disney Infinity: Marvel Super Heroes replaces the roulette-based unlock system from Disney Infinity. If a player is defeated in-game, they must wait a certain time frame until they can use the character they were using again. A map scanner has been implemented to allow players can get around worlds more easily. Mission givers are also present in the game. In order to web-sling players do not need to attach their webs to surroundings near by.

Disney Infinity: Marvel Super Heroes is split up into two game modes: Playset and Toybox (referred in Disney Infinity: Marvel Super Heroes as Toybox 2.0.) In Playset mode, players can play open world multiple story modes based specifically on a certain franchise. Each Playset spans from 6–10 hours in length. These Playsets can be accessed by placing the Playset piece (also known as a crystal shard piece) on the Disney Infinity Base, a near field communication-enabled hexagonal platform that has two round spots to place figures (and use in them in the game) and one hexagonal spot to place the Playset piece or Power Discs. Only figures, usable in the game through near field communication technology, that are from a Playset's corresponding franchise can be used in that Playset. Certain characters, including Nova, Iron Man, Rocket Raccoon and Hulk are playable in more than one Playset, by collecting tokens (called "Cross Over Tokens") scattered throughout levels. Once players have collected ten Cross Over Tokens for one character, that character can be used in another Playset and will unlock exclusive storylines. The Avengers Playset and the Spider-Man Playset take place in "Marvel Manhattan," a version of Manhattan that is 4x larger than The Incredibles Playset featured in the first Disney Infinity title.The Incredibles Playset was the largest environment in Disney Infinity. While in Playset mode, players will be able to uncover secret missions and new goods that can be used in the Toybox. Bendis will pen the stories and dialogue of all future Marvel Playsets. Local multiplayer can be accessed through split screen.