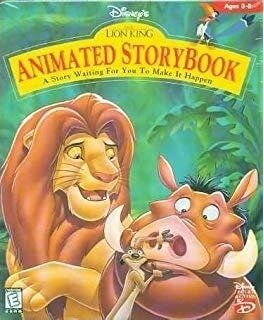 Disney's Animated Storybook (stylized as Disney's Animated StoryBook and also known as Disney's Story Studio) is a series of point-and-click adventure interactive storybook video game series, based on theatrical and home video releases. They were published by Disney Interactive for personal computers (Microsoft Windows and Apple Macintosh) for children ages 4 to 8 years old. Starting in 1994, most entries in the series were developed by Media Station. The games included both Disney and Pixar licenses. They have the same plots as their respective movies, albeit abridged due to the limited medium. The games have hundreds of clickable hotspots that produced animated gags, as well as many mind-challenging interactive games.

Players are encouraged to engage with the titles via interactive story-telling, discovery, and skill-building activities intended to provide fun yet educational experiences.5 The games are within the adventure gaming genre and as such use a point-and-click interface. There are a series of icons that the mouse turns into when it runs over hotspots, depending on how one can interact with them. This can include interactions like a minigame, song or animation. The method of going from page to page is often creative and unique to the storybook; for example, in Disney's Animated Storybook: 101 Dalmatians, there are a series of inked feet leading to the exit (a reference to when the dogs roll in soot to evade Cruella De Vil). The games offer abridged retellings of their respective films, with various plot elements of the film changed. Containing in-game narration, the games allow players to read and play along with the story, or just have the narrator read the story to them. When playing along with the story, players can click on various hotspots to trigger animations or sound effects. Additionally, some "pages" of the story feature optional minigames.

Often, some of the voice cast from the films reprised their roles for the games. In the case of 101 Dalmatians, to appeal to 1990s kids, some technology of the original film's time were updated and new technology were added, including computers, video game consoles (supporting Roger's occupation, which is similar to his change in occupation for the 1996 live-action film), larger screen television sets, and passcode-enabled security gates, e.g. Roger's occupation changed from songwriter to video game designer. This game also features a soundtrack of karaoke sing-along songs, which includes five new songs and a new recording of the original film's famous song "Cruella De Vil". Ariel's Story Studio also has a "Create Your Own Storybook" feature that allows players to devise their own storybooks, both words and pictures, and then print out the finished product.5 Mulan contains more gameplay than other titles within the series; players look for scrolls across locations such as Mulan's house, the army camp, Tung Shao Pass, and the Imperial City. After the player finds all five scrolls and gives them to the emperor, they are made an official Imperial Storymaker, and are then given the ability to create original scrolls; their own animated storybooks using the software.5 The roleplay within minigames allows players to interact with scenes from the films. In a first for the series, in Hercules the story is narrated in rhyming text, and also allowed players to sing along to karaoke versions of songs from the film. "Pick-a-Page" allows children to review their favorite part of the story and find out more information by clicking on different parts of the screen.0 "How to Play" gives players more instruction on each screen should they need it.0 Clicking on an obect creates a short site-specific animation which, unlike traditional adventure games, is superfluous and doesn't affect the sotryline. The games provide players with art, poetry, and literature to teach sequencing, vocabulary skills, creative writing and auditory discrimination, to sing along with Disney tunes, practice memorization, learn music appreciation, focus on literacy skills such as vocabulary and reading comprehension, and create artwork on desktop publishing software; additionally the series is "designed to enhance supplemental learning in the classroom, and to give young children practice with early childhood motor skills and language arts".5 Often the minigames came with different difficulty levels.6