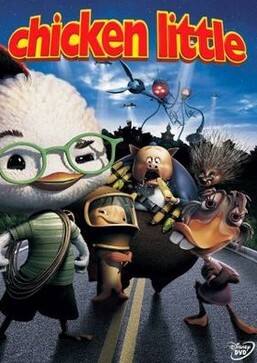 Chicken Little is an action-adventure video game, developed by Avalanche Software for PlayStation 2, Xbox, GameCube, and Windows, and developed by Artificial Mind and Movement for the Game Boy Advance; both were published by Buena Vista Games. Based on the 2005 film of the same name, they were released in October 2005. The game was planned for release on Nintendo DS, but this release was cancelled. A sequel, Disney's Chicken Little: Ace in Action, was released in 2006. Original music for the console game was composed by Billy Martin. The game is an action-adventure with gameplay similar to that of Tak and the Power of Juju.

The game follows the same plot as the 2005 film of the same name. The game also features the original actors reprising their roles in the game, except for Joan Cusack and Don Knotts.

The game is set as a action-adventure game, in which it's very similar to Tak and the Power of Juju. The player takes control of Chicken Little throughout the entire game, and occasionally the player will be able to play as Abby, Runt, and Fish Out of Water in six different levels and Mayor Turkey Lurkey in one level. The player also has to collect five baseball cards throughout each level of the game, the cards will help unlock special bonus mini-games in multiplayer mode.