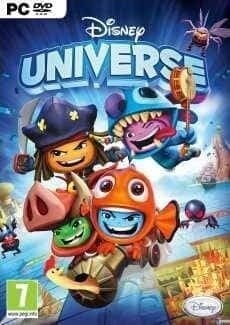 Disney Universe is a co-operative action-adventure video game developed by Eurocom and published by Disney Interactive Studios. It was announced at E3 in 2011 and was released on Microsoft Windows, PlayStation 3, Wii and Xbox 360 on October 25, 2011 in North America and October 28, 2011 in Europe. It features the ability to suit up as characters from multiple Disney franchises, including Aladdin, The Lion King, Monsters, Inc., WALL-E, Finding Nemo, Pirates of the Caribbean, Phineas and Ferb, and The Muppet Show.

Up to four friends can connect through local multiplayer and play through 6 different worlds to defeat enemies, and collect powerups and coins. One unique feature is that the enemies actively try to hinder a player's progress by setting up traps or hiding key items.

The two main attractions of the game are the levels and the costumes. Players travel to 6 worlds from classic and contemporary Disney and Pixar properties, consisting of Alice in Wonderland, Pirates of the Caribbean, The Lion King, Wall-E, Monsters, Inc., and Aladdin. The travelers can acquire 45 costumes based on numerous other Disney franchises, such as The Little Mermaid, Tron, Mickey Mouse, Lilo & Stitch and Finding Nemo.

The costumes need to be upgraded by finding stars in the levels. The skill set remains the same for each, but becomes more powerful. Each character has a handheld weapon specific to that character. For example, Aladdin ends up with Genie's lamp at 4 stars, and Sully has a piece of Boo's door.

Downloadable content has been announced to be a big part of Disney Universe for the PlayStation 3, Wii, and Xbox 360 versions of the game. Through the "Online Shop" featured in the game or the PlayStation Store, Wii and Xbox Marketplace the DLC's will feature additional costumes and worlds. The first release featured a "Disney Villains Costume Pack." A theme-pack based on The Nightmare Before Christmas, was released near the Christmas season and is the Disney Universe voting poll winner. Theme-packs based on Phineas and Ferb and The Muppets were released in March 2012.