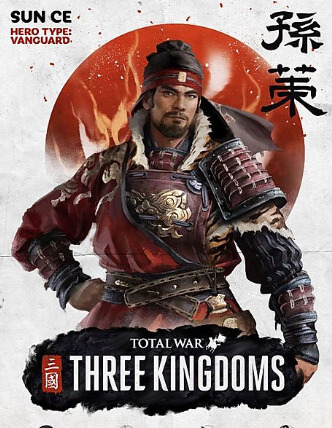 Total War: Three Kingdoms is a turn-based strategy real-time tactics video game developed by Creative Assembly and published by Sega. As the 12th mainline entry (the 13th entry) in the Total War series, the game was released for Microsoft Windows on May 23, 2019. Feral Interactive released a macOS and Linux version of the game on the same day.

Like its predecessors, Total War: Three Kingdoms is a turn-based strategy real-time tactics game. Set in the Three Kingdoms period (220–280), players control one of the game's twelve factions, who must eliminate other factions, unify China and become its ultimate ruler. These factions are led by warlords, such as Cao Cao, Liu Bei, and Sun Jian. In siege battles, players command both infantry and cavalry units. All the units featured in the game are divided into different retinues, with each led by a powerful general. The player can deploy up to three generals into the battlefield at once along with three in reserve, and players will only have access to the units that said generals can recruit.

The player wins a siege battle when all hostile generals are killed or the central point of the city is captured. These generals, which can be commanded separately from their troops, have possession of unique ancillaries, which can be looted once they are killed. For instance, Lü Bu's Red Hare can be captured and used by other generals. Generals can engage in a one-versus-one dueling, which ends when one of them dies or flees. Each general has different classes and specialties, granting their units with both active and passive buffs. The team introduces the concept of "guanxi" to the game, in which each general will form social connections and relationships with other characters. Viewing concepts like "obligations, reciprocity, and trust" as important virtues, these generals have unique personalities and desires that players need to cater to. If their demands are not met, their happiness rating will drop and this may lead to various repercussions for players. Unlike previous Total War games in which characters seldom interact with each other, the generals featured in the game are actively forming relationships with the characters they meet throughout the campaign. This adds a strategic layer to the game in which players need to understand these generals before making any decision.

The game features two game modes. The first mode, "Romance", is based on the novel Romance of the Three Kingdoms, in which generals are gifted with nearly superhuman strength. Another mode, "Records", based on Records of the Three Kingdoms, presents a more historically authentic version. In Records, the generals have their powers removed and they can no longer be commanded separately, in addition to changing certain equipment in-game to be more historically authentic.

The game begins in 190 AD, in which the once glorious Han dynasty is on the verge of collapse. The new emperor, Emperor Xian, enthroned at the age of eight, was manipulated by the warlord Dong Zhuo, whose oppressive rule leads to chaos. New warlords rise and form alliances to start the campaign against Dong Zhuo. With each warlord having personal ambitions and allegiances constantly shifting, the champions that emerge from the ever lasting wars will shape the future of China.