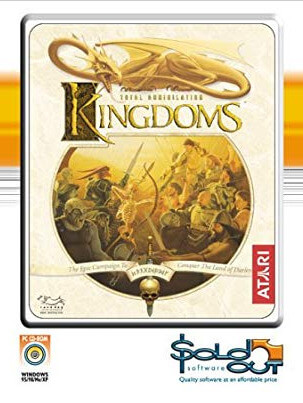 Four sibling monarchs struggle for domination of the land of Darien: Elsin of Aramon, Kirenna of Veruna, Thirsha of Zhon and Lokken of Taros, following the disappearance of their father, Garacaius.

A more in-depth storyline, told with cutscenes between missions just as Total Annihilation had, but with more detail.

A change from a futuristic setting to a fantasy setting.

Simplified resource-management, with just one resource (mana) instead of two (metal, energy).

Four sides at the start, as opposed to the original's two, with an expansion pack that added in a fifth.

Unlike the original Total Annihilation which has most of the units on its two factions virtually the same, other than in appearance, Total Annihilation: Kingdoms has very distinct characteristics between factions.

Players must seek out lodestones to build mana tapping structures on, getting the renewing energy to build structures and units with.

Players can choose between the original game balancing or the "Crusades" balancing, which was added in after feedback from online play, it allowing defensive structures to do more damage against most tier 1 units to prevent rushes. They can also choose whether to end the game after their opponent's monarchs is killed, or to keep playing until all of their enemy's units and unit producing structures are destroyed. Up to eight players can be in a game, either human players or game AIs.

Additional units were created and freely released by Cavedog after the game was released, as well as additional maps and scenarios.

TAK can be played online through Game Ranger. Up to 8 players can play together at a time either on teams or against one another. This mode of the game also enables scripting (mission-type games in multiplayer) to be played.

On March 6, 2000, shortly before Cavedog's collapse, an expansion pack was released titled The Iron Plague. The premise of the sequel continued the storyline of the lost father of magic, Garacaius. Believing that magic was a source of conflict, Garacaius fled his kingdom and founded a new empire based on science and engineering, as opposed to magic. This new empire, Creon, quickly dominated the neighboring provinces and absorbed the knowledge of their conquests. Garacaius himself died, but the elected ruler of Creon (in a steam-powered robotic suit) eventually led the kingdom on a crusade against magic and the magical sibling rulers of Darien. The expansion pack added an entirely new faction to the game (the science and engineering kingdom of Creon), as well as hundreds of new maps and entirely new graphics for map tile sets. It included the newest patch for the game, although anyone could freely download this from the official site.

Rick Sanchez reviewed the PC version of the game for Next Generation, rating it three stars out of five, and stated that "Kingdoms is a well crafted, if a little dumbed-down, RTS title that offers good gameplay but not genre-advancing game design."

Mark Asher of CNET Gamecenter wrote that "Kingdoms didn't do too badly commercially, but with a much larger development and marketing budget than TA's, it certainly underperformed when compared to that title."

IGN gave it a rating of 6.9 stating that "Cavedog's me-too fantasy game is beautiful, but the gameplay leaves a lot to be desired."

Cnet originally gave it a bad review partly for the heavy lag in-game, then stated this problem was fixed with the free 2.0 patch and gave a more positive review. Cnet gave it 3 and a half stars out of 5.