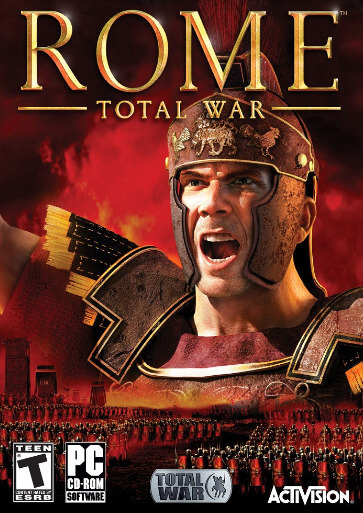 Rome: Total War is a strategy video game developed by The Creative Assembly and originally published by Activision; its publishing rights have since passed to Sega. The game was released for Microsoft Windows in 2004. The macOS version was released on February 5, 2010 by Feral Interactive, who also released the iPad version on November 10, 2016, the iPhone version on August 23, 2018, and the Android version on December 19, 2018. The game is the third title in The Creative Assembly's Total War series.

The game's main campaign takes place from 270 BCE to 14 CE, showcasing the final centuries of the Republican period and the early decades of the imperial period of Ancient Rome. The player initially assumes control of one of three Roman families; other, non-Roman factions can be unlocked later. Gameplay is split between real-time tactical battles and a turn-based strategic campaign. Within the campaign, players manage the economy, government, diplomacy, and military of their faction and attempt to accomplish a series of objectives on a map that encompasses most of Europe, North Africa, and the Near East. On the battlefield, the player controls groups of soldiers and uses them to engage in combat with enemy forces.

Upon release, the game received widespread acclaim from critics. In the years since, the game has frequently been referred to by critics as one of the greatest video games of all time. Two official expansion packs, Barbarian Invasion and Alexander, have been released for the game, as well as numerous player-made modifications, notably Rome: Total Realism and Europa Barbarorum. A sequel, Total War: Rome II, was released on September 3, 2013.

As with previous games in the Total War series, Rome: Total War has two primary modes of play: a turn-based, single-player campaign that takes place on an overhead map of the world and a real-time battle system that occurs on 3D battlefields.

Initially, the player takes command of one of three Roman families during the later years of the Roman Republic: the Julii, the Brutii, or the Scipii. Eventually, the player can play as other factions in the world by either conquering them individually or by accomplishing the objectives of the campaign. The ultimate goal of the campaign is to become emperor by conquering fifty provinces, including Rome itself, but a "short game" can be played in which the player must control fifteen provinces and outlast a certain faction or factions.

Control over territory in the game is represented by capturing and holding a major city in that territory. New cities are conquered by either training soldiers in cities that are already owned and then using those soldiers to besiege enemy cities or by bribing the city into switching sides. Apart from simply expanding one's faction, cities can have positive or negative effects on a nation. For example, well-managed cities can provide the faction that owns them with valuable tax income, but poorly-managed cities may cost the player more money in maintenance than they make in taxes. Cities have a variety of buildings that may be built or upgraded, such as temples, aqueducts, and amphitheatres. Buildings have different effects on the city; for example, aqueducts improve public health and decrease urban squalor, which in turn makes the inhabitants of the city happier. If cities grow too unhappy, they may revolt and either return to a faction that previously owned them or become a part of a generic "rebel" faction.

Each faction starts with a set of family members. The head of the family is the leader of the faction; any male above the age of 16 can be designated as the current leader's heir. Males above the age of 16 can govern settlements and command armies as generals. Male family members can be added through births between married family members, adoption, or marriage with a female family member. Family members eventually die; natural causes, battles, assassinations, diseases, and natural disasters can all cause a character's demise. Family members can develop character traits from life experiences or heredity. These traits can have both positive and negative effects on the character's stats, which in turn affect their battlefield performance, how well they manage their settlements, and how persuasive they are in negotiations. The stats of family members can also be affected by members of their personal retinue.

Agents can also acquire traits and retinue members. Agents are special types of characters that can be recruited in cities with the proper buildings. There are three types of agents: spies, diplomats, and assassins. Spies can be used to gather intelligence about the composition of armies, infiltrate foreign cities, and serve in a counter-espionage role in the players own cities. When besieging an enemy city, spies stationed within that city have a chance to open the gates. Assassins can assassinate characters and commit sabotage in settlements. Spies and assassins can both be killed during their missions. Diplomats can offer a variety of diplomatic deals to other factions, such as alliances, tributes, and trade rights. They may also attempt to bribe foreign armies, cities, agents, and family members into either defecting or, if the soldiers being bribed are not "compatible" with the other faction, deserting.

In addition to the turn-based campaign, Rome: Total War also features 3D, real-time battles. Battles can be played as a part of the larger campaign, as a custom battle against the AI, as a preset "historical battle" based on a real-life military engagement, or as a multiplayer battle against other players. As opposed to the campaign, which features an overhead map of the world, battles take place on individual battlefields. The terrain of the battlefield can play a key role in how the battle plays out. In most cases, the ultimate goal of the battle is to defeat the enemy forces by either killing or routing all of their troops; in a siege, the attacker can also achieve victory by capturing and holding the town center for a period of time. In battles, the player commands a variety of soldiers that are arranged into units. The game features a variety of units for battle, which may be broadly categorised into infantry, cavalry, archers, and siege weapons. Different units have different morale, hit points, and general combat skills. If a unit's morale drops too low, its soldiers try to flee the field. Units can create different formations that alter how they perform in combat; for example, many types of spearmen can form the phalanx formation, while many Roman soldiers can form the testudo. Both of these formations sacrifice mobility in favour of defensiveness. The player can also employ complex tactics to help them achieve victory; for example, soldiers can ambush enemies from a nearby forest or flank them to avoid a frontal engagement.