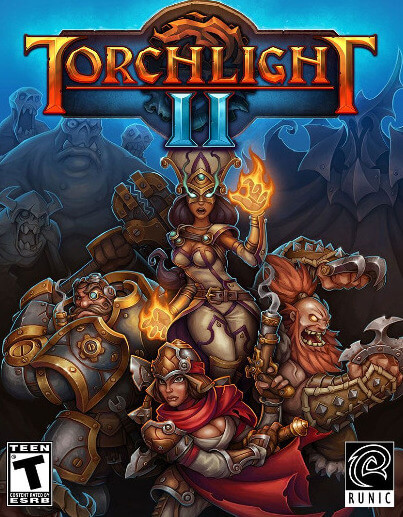 Torchlight II is an action role-playing dungeon crawler video game developed by Runic Games, released for Microsoft Windows on September 20, 2012. It is the sequel to Torchlight, and features peer-to-peer multiplayer support and extended modding capabilities. The game was released for OS X on February 2, 2015, and for Linux on March 4, 2015. Ports for Nintendo Switch, PlayStation 4, and Xbox One are planned for a 2019 release, and are being developed by Panic Button.

Torchlight II takes place in a fantasy world where the player character can be any of four classes, each with different skills and abilities. The plot starts with the destruction of the town of Torchlight, at the hands of the Alchemist from the first game, and has the character following the trail of destruction left in the Alchemist's wake as he searches for a cure to his illness which has driven him insane. The sequel to the first game was originally going to be an MMORPG however Torchlight II was released with both single-player and multi-player support, as the company felt they could release this much faster than the planned MMO. The game received mostly positive reviews from critics. In 2018, the MMORPG successor to the game was announced as Torchlight Frontiers.

Like the original Torchlight, Torchlight II features randomly generated dungeons for the player to explore, and numerous types of monsters to fight for experience and loot. Torchlight II maintains the same basic gameplay as its predecessor, but features overland areas with multiple hub towns, and a longer campaign. Other new features include time of day cycles, weather effects, and a redesigned user interface. Also unlike the first game, some weapons and armor can only be used by certain classes, as opposed to all of them. Players are able to customize character appearance with choice of sex, face, hair style and hair color. Additionally, several elements from the first game return, such as pets (but now with expanded options and basic customization available) and fishing. A retirement system was originally planned, similar or identical to the one in the first game, but was replaced with the current New Game Plus mode.

The game features four playable character classes. Each class has 3 skill trees to choose from which enable customization within each class. The three classes from the original Torchlight do not return as playable characters, and are instead presented in the game world as NPCs.

As stated in the trailer for Torchlight II, Runic games has announced that they "heard their the fans' ideas" and criticism concerning the fact that the first Torchlight was a lonely experience without co-op. In addition to single-player mode, an all-new cooperative multiplayer mode has been added, supporting both internet and LAN play. Each multiplayer game can host up to 6 players, and loot drops separately for each player. Optional PVP (player versus player) has been confirmed by Runic. Torchlight II requires a Runic Games account to play in online multiplayer games.

Years after the end of the original Torchlight, The Alchemist (playable character in the first game) becomes corrupted by the Ember Blight coming from the Heart of Ordrak, the evil being who had been the source of the corruption under the town of Torchlight, and then destroys the town. The player character takes on a quest to stop this villain, who is using Ordrak's power to disturb the balance between the world's six elements.

As the game progresses, the player treks across large geographical areas, corresponding to three "acts" of the story and an epilogue. Act I, Wake of the Alchemist, is set in the mountainous Estherian Steppes, and Act II takes the player to a desert known as the Mana Wastes, and Act III takes place in Grunnheim, a haunted forest that contains the ruins of an ancient dwarven civilization. An Imperial Camp serves as the player's town.

Though the original Torchlight received positive reviews, the game's lack of any multiplayer modes was a near-universal criticism of the title by critics and fans alike. Prior to the release of the first game, Runic Games had announced plans to develop a MMORPG set in the Torchlight game world to follow the release of the single player game. However, in August 2010, Runic announced they were developing Torchlight II, a sequel which was conceived not only as a way to give the series multiplayer support, but also to give Runic "more experience with making a multiplayer Torchlight." Some of the work on Torchlight II is intended to carry over to Runic Games' upcoming Torchlight MMORPG, which the company plans to focus on following the release of the sequel. Runic Games originally estimated the PC version's release date to be sometime in 2011, but in November 2011 company president Travis Baldree announced the game release date would be pushed back to 2012 to allow time for further polishing and beta testing.

In late 2010, Runic Games' increased involvement in the Xbox Live Arcade port of the first Torchlight game caused a delay in the development of the sequel, but memory and loading time optimizations developed for the port led to improvements in the PC version of Torchlight II.

Unlike its predecessor, Torchlight II features cinematic sequences, which are produced by Klei Entertainment, the developer of Don't Starve, Eets and Shank.