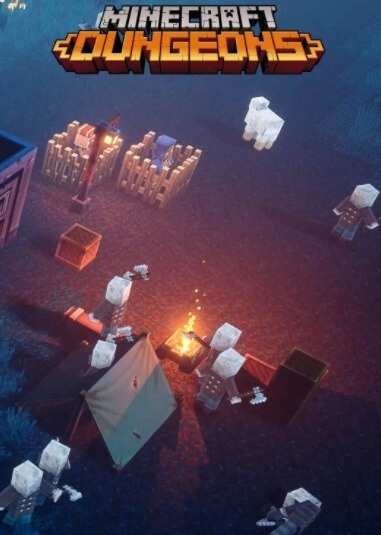 Minecraft Dungeons is a dungeon crawler video game developed by Mojang Studios and Double Eleven and published by Xbox Game Studios. It is a spin-off of the sandbox video game Minecraft and was released for Nintendo Switch, PlayStation 4, Windows, and Xbox One on May 26, 2020.

The game received mixed reviews; many deemed the game fun and charming, with praise for its visuals and music. However, its simple gameplay and use of procedural generation were met with a more mixed reception, with its short story and lack of depth criticized.

Unlike Minecraft, Minecraft Dungeons doesn't feature an open world, nor mining or building. Instead, it is a hack and slash-styled dungeon crawler, rendered from an isometric perspective.

Players explore procedurally generated and hand crafted dungeons filled with randomly-generated monsters and also deal with traps, puzzles, bosses and finding treasure. There is no class system; players can use any weapon or armor they wish. The game includes a four-player local and online multiplayer.

Minecraft Dungeons is set in the same fictional world as Minecraft, known as the "Overworld", consisting of rough 3D objects—mainly cubes and fluids, and commonly called "blocks"—representing various materials, and inhabited by both peaceful and hostile mobs. Unlike Minecraft, the game features a linear, story-driven campaign, and cutscenes.

The opening cutscene tells the story of an Illager named Archie, who was driven away by his people. While searching for a new home, he was forced to leave every village he found due to Villagers not allowing him to live with them. One day, Archie stumbled upon a powerful artifact known as the "Orb of Dominance", which granted him magic powers, but also corrupted him.

Now known as the "Arch-Illager", he sought vengeance on all those who wronged him, and subjugated numerous villages with his new army. Players assume the role of heroes who embark on a quest to defeat the Arch-Illager, while liberating villages, fighting monsters, and completing various quests to pass on to the next level.

Ultimately, the players face the Arch-Illager in his castle, destroying the Orb of Dominance in the process, which frees Archie from its influence. While he is afraid of them at first, the players instead befriend him, showing him that there are also kind people in the Overworld. As the players and Archie depart, the Orb is shown to be rebuilding itself.

In the Jungle Awakens expansion pack, it is revealed a shard of the Orb went into a jungle, corrupting the nearby land and creating a monstrosity known as the "Jungle Abomination", which the player(s) must defeat.

Dungeons is developed by Mojang Studios for Xbox One, Windows 10, PlayStation 4, and Nintendo Switch using Unreal Engine 4. Console ports are being done by Double Eleven.

With the continued success of the original Minecraft, Mojang thought about other possible games that could bring something new to the Minecraft universe. Experimenting with different ideas, the game was originally meant to be a single-player dungeon crawl game, inspired by The Legend of Zelda series, for the Nintendo 3DS.

However, as the game began to take shape, these elements were changed or removed. For example, after adding in multiplayer features, the development team realized that these changes made the game more fun. According to game director Måns Olsen, the game was inspired by Diablo and Torchlight, as well as co-operative first-person shooter games like Warhammer: End Times – Vermintide and Left 4 Dead.

One of the primary challenges the development team faced was figuring out how to adapt the gameplay of dungeon crawl games like Diablo into the world of Minecraft. Since Minecraft characters did not have any special innate abilities, Mojang had to think of alternatives to things such as character class that would normally be found in games of that genre.

Their solution was to focus on creating weapons and armor that the player could make more powerful through enchantments, allowing the player to explore their creativity through customization.

In addition, Mojang wanted to streamline the traditional dungeon crawl game experience into something more accessible. Olsen remarked that other games in the genre "are approachable to some degree, but they're typically games with very deep, interconnected systems", and that they wanted to make getting into Minecraft Dungeons "super easy" yet "instantly familiar".

The decision to not allow building or crafting, a staple of the original Minecraft, was also made in order to focus on the core dungeon-crawling experience. To give more experienced players a challenge, the team added options to change the game's difficulty, which would reward players with better equipment and new secret content for playing on harder difficulties.

Minecraft Dungeons was first announced on September 28, 2018 during the Minecon live streaming event. A video showcasing gameplay was released during E3 2019.