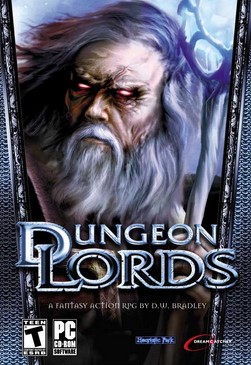 Dungeon Lords is a real time fantasy role-playing video game developed by David W. Bradley of Heuristic Park, originally published by DreamCatcher Interactive and Typhoon Games, and released in 2005. However, many features were left out from the original release in an effort to meet the release date. In 2006, they re-released the game as Dungeon Lords Collector's Edition with more complete features.

In 2012, after the demise of DreamCatcher Interactive and subsequent acquisition by Nordic Games, they announced the release of a completely "remastered" version of the game, titled Dungeon Lords MMXII. Dungeon Lords MMXII was released in Europe on September 28, 2012, and in North America on October 5, 2012.

In 2015, a version of the game titled Dungeon Lords Steam Edition was released on Steam.

Dungeon Lords' gameplay features a combat system where weapon combos are controllable by mouse movements. It includes quests, personal missions, skills and special abilities for customizing the character hero from a small set of races and class specializations. Dungeon Lords can be played either single-player stand alone or in multi-player group sessions. The combat was inspired by console fighting games.