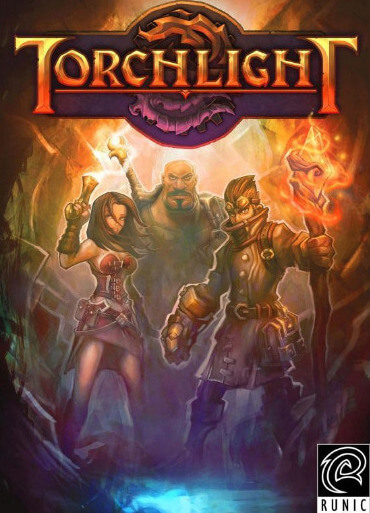 Torchlight is an action role-playing hack and slash dungeon crawler video game developed by Runic Games and published by Perfect World, released for Windows in October 2009. The fantasy-themed game is set in the fictional town of Torchlight and the expansive caverns and dungeons nearby, which adventurers explore to collect valuable loot and battle hordes of monsters. Following the October 2009 digital distribution release, a Windows retail box version was released in the U.S. in January 2010 by Encore, Inc, and JoWooD Entertainment published a retail box in Europe in April 2010. A port for OS X was developed by World Domination Industries and released through Steam on May 12, 2010. Runic Games and World Domination Industries developed a port for Xbox Live Arcade which was released on March 9, 2011. A Linux port was released as part of the game's inclusion in the Humble Indie Bundle 6.

Development of the game was led by Travis Baldree, designer of Fate, joined by Max Schaefer and Erich Schaefer (co-designers of Diablo and Diablo II), and the team that worked with Baldree on the original incarnation of Mythos. In September 2012, Runic Games released a sequel, Torchlight II, for Windows. In 2018, the long-planned MMORPG was announced as Torchlight Frontiers.

The player controls a lone hero who explores a series of randomized dungeons, fighting large numbers of enemies and collecting equipment, gold, and other loot. The game also features a single town which serves as a hub, to which the player character can periodically return to buy and sell items to NPC vendors and obtain quests. As the protagonist delves into the dungeon, a series of quests are presented which involve battling unique bosses that advance the main storyline. Optionally, the player may take on side quests, random quests or visit branching dungeon areas. The graphics are three dimensional and viewed from an overhead perspective, similar to the isometric perspective used in the original Diablo. On personal computers, the game is controlled using a point-and-click mouse interface and keyboard hotkeys, while the Xbox Live Arcade version uses a controller and has a completely redesigned user interface.

The game generates each level of the dungeon by assembling modular "chunks" of the game environment. Each chunk is designed by hand and may be composed of multiple rooms. They can contain scripted events and interactive objects such as levers that open secret doors or cause bridges to move. This approach to level generation is intended to create dungeons with more purposeful design, instead of environments that simply look like "crossword puzzles that have been extruded upwards."

As in Fate, the player has a permanent pet which fights alongside and can carry and sell loot. The initial pet can be a wolf dog, a lynx or, in the retail version of the game, a ferret; the player can feed fish to their pet to transform it into different creatures.

Also present in the game is a retirement system, in which the player can pass on an heirloom item from an old character to a newly created one, likened to a New Game Plus game mode.

The Destroyer is a wandering warrior skilled in melee combat, although he also has the ability to call upon ancestral spirits to produce magical effects.

The Alchemist is a spellcaster drawn to the magical power of Ember. He can fire blasts of magic and electricity from his specialized focus glove and can summon imps and steampunk-styled robots.

The Vanquisher is an elite city guard, sent undercover to investigate the town of Torchlight. She specializes in ranged weapons and can also use traps against her foes.

The player develops their character by placing points into class-specific skill trees. Further, there is a separate category of spells that any character can learn from scrolls, regardless of class.

In the fantasy world that serves as the setting of Torchlight, Ember is a mysterious ore which has the power to imbue people and items with magical power. The mining boomtown called Torchlight is built above a rich vein of Ember, and adventurers are drawn there seeking the magical substance and the enchanted items it creates. However, as the player character explores the dungeons below Torchlight, they discover that Ember has a corrupting influence which led to the fall of past civilizations and endangers those who use it in the present.

The player character arrives in town and is recruited by Syl, a sage who is searching for her mentor, an alchemist named Master Alric who has disappeared in the nearby mine. At the bottom of the mine tunnels, the player finds a passage into older, crypt-like chambers below, eventually discovering that the entire dungeon is a "layer cake of ruined civilizations." Alric ambushes the player and reveals he has become evil due to the corrupting influence of Ember. After fighting a series of monsters and henchmen to reach the bottom of the dungeon, the player must face Alric and an ancient creature named Ordrak who is the source of the Ember's corruption.