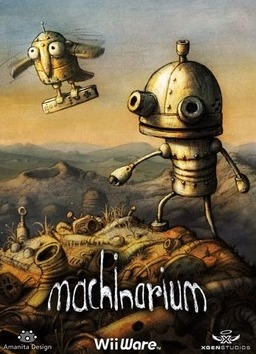 Microsoft Windows, OS X, Linux and Android versions of this game were released along with Humble Indie Bundle for Android 4 on 8 November 2012, to customers who paid over the average price. The Windows Phone version was released on 22 March 2014.

The goal of Machinarium is to solve a series of puzzles and brain teasers. The puzzles are linked together by an overworld consisting of a traditional "point and click" adventure story. The overworld's most radical departure is that only objects within the player character's reach can be clicked on.

Machinarium is notable in that it contains no dialogue, spoken or written, and apart from a few tutorial prompts on the first screen, is devoid of understandable language entirely. The game instead uses a system of animated thought bubbles. Easter egg back story scenes in the same format can only be revealed by idling in certain areas.

The game employs a two-tier hint system. Once per level, the player can receive a hint, which becomes increasingly vague as the game progresses. Machinarium also comes with a walkthrough, that can be accessed at any time by playing a minigame. As with dialogue, the walkthrough is not in written or spoken form, but instead a series of sketches describing the puzzle at hand and its solution. However, the walkthrough only reveals what must be done in that area, and not how that puzzle relates to the game chronology.

Machinarium opens with an overview of the eponymous city as a disposal flier launches from the pinnacle of its highest tower. The player character, a robot called Josef (named after Josef Čapek, the creator of the word "robot" and brother to Karel Čapek) is dumped on a scrapheap, where he re-assembles himself and sets off for the city. Entering the city, he discovers a plot by the Black Cap Brotherhood, his three criminal antagonists, to blow up the city's tower. Unfortunately, he is himself discovered and locked up. After breaking out of prison, Josef aids the citizens of the city, as he discovers the mischief which the Brotherhood has been working. Shortly after flooding the Brotherhood's room (leaving them helpless), Josef locates his girlfriend Berta, who has been locked up and forced to cook. Unable to free her, he works his way to the top of the tower. After he foils the Black Cap Brotherhood's plot by disarming the bomb taped to the tower, Josef reaches the highest room, in which the story began. A huge-headed robot, the "head" of the city, sits in the middle of the room, incapacitated and gibbering. Josef recalls how the three of them lived happily until the Black Cap Brotherhood zapped this friend, leaving him disabled, and kidnapped Berta. When a garbage sucker arrived to dispose of the Black Cap thug, it apprehended Josef instead. After this revelation, Josef restores his friend to sanity, dumps the Brotherhood down a drain, and frees Berta. The two of them climb back to the tower, wave goodbye to their friend, and fly off into the sunset. In the final closing scene, their vehicle suffers a collision and falls, and they are seen being carried away separately by two fliers.

Machinarium was developed over a period of three years, by seven Czech developers, who financed the project with their own savings. The marketing budget for the game was a scant $1,000.

The game was in development for the Xbox 360 platform for a period of six months; however, Microsoft, whom the developers had approached to publish the title on Xbox Live Arcade, ultimately decided not to do so. Microsoft does not allow games to be released on Xbox Live Arcade without a publisher attached to the title, and the developers were reluctant to approach a third party to publish the game, as this would mean that profits for the developers from sales over Xbox Live Arcade would be greatly reduced. Subsequently, Amanita Design approached Sony, whose policies do allow for self-publishing on the PlayStation Network platform, and have submitted the game to them for approval, in order to release the game on the PlayStation Network.

In 2011 it was mentioned that a sequel to Machinarium "is possible" but something the team has yet to fully consider. "We don't look far through the future", said Jakub Dvorský.

Machinarium was well received on release; on the critic aggregate sites GameRankings and Metacritic, the game has an average score of 85% and 85/100, respectively.

In 2008, it won the Aesthetics award at IndieCade (the International Festival of Independent Games). It won the Excellence in Visual Art award at the 12th Annual Independent Games Festival and the Best Soundtrack award from PC Gamer in 2009. It was nominated for an Outstanding Achievement in Art Direction award by the Academy of Interactive Arts & Sciences and a Milthon award in the 'Best Indie Game' category at the Paris Game Festival.

Gaming site Kotaku named it a runner-up for "PC Game of the Year 2009" alongside Torchlight, losing to winner Empire: Total War. Gamasutra, Gamerview and the Turkish site of Tom's Hardware all selected Machinarium as the 'Best Indie Game' of 2009. AceGamez named Machinarium the 'Best Traditional Adventure Game' of 2009.

On 5 August 2010, Amanita Design announced that according to their estimates, only 5–15% of Machinarium players had actually paid for the game. In an effort to increase sales, the game's price was lowered from the regular $20 to $5 until 12 August as an incentive for pirates to purchase the game legally. The campaign was later extended until 16 August, resulting in 20,000 game copies sold over the whole amnesty period.