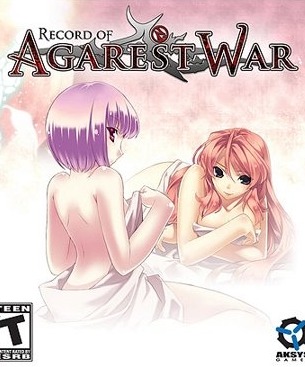 Record of Agarest War (アガレスト戦記 Agaresuto Senki), known in Europe as Agarest: Generations of War, is a tactical role-playing game for PlayStation 3, Xbox 360 and Microsoft Windows. The game is a collaboration between Idea Factory, Red Entertainment and Compile Heart. An updated port of the game was released in Japan for the Xbox 360 on November 27, 2008. HyperDevbox released an Android port on December 19, 2013, and an iOS port on May 16, 2014.

The story progresses through various points plotted on a map. By visiting each point, the player has to battle the creatures, complete a quest, visit a town or go through a conversation to advance through the storyline and open up more points.

Fighting plays out like a strategic RPG where each character has his/her own set of moves, but by moving each character to an appropriate square, you can chain characters together and pull off combos. After each round of combat, each character will regenerate AP and accumulate SP points. When enough SP points have been accumulated, characters can unleash special attacks.

The game includes dating sim elements through its "Soul Breed" system in which the player creates a new character by pursuing a relationship with a female character as the game's storyline extends for five generations, each one having a different male protagonist. For the first four generations the protagonist marries one among three of his female companions and their son becomes the protagonist of the following generation who inherits stats and abilities from his parents.

The game was localized in Europe as Agarest: Generations of War by Ghostlight. The company planned to publish a standard retail version and a collector’s edition, both released on October 30, 2009 for PlayStation 3. Initially, the game was set to use a cover art featuring a realistic version of the protagonist; however, negative feedback led to the publisher changing the cover art for one more faithful to the original. The 32 packs of DLC were put on the European PlayStation Store by Ghostlight.

The game was later ported to PC, and made available on the Steam store in North America and Europe.

GameZone's Andrew Clouther gave the PC reboot a 6.5/10, stating " If you’re a fan of the Agarest franchise, looking to spend 50+ hours on a game, or just want to try a different tactics type game, I recommend Agarest Generations of War. I rarely say this, but the game is too long."