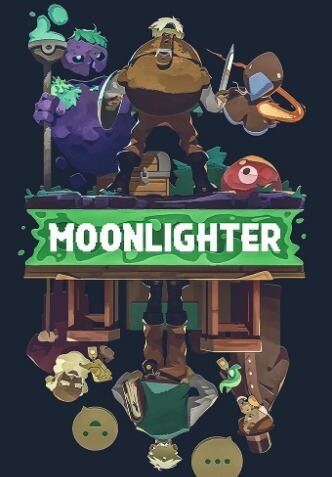 Moonlighter is an action RPG indie game developed by Spanish indie studio Digital Sun and released for Microsoft Windows, macOS, Linux, PlayStation 4, and Xbox One on May 29, 2018. A Nintendo Switch version was released on November 5, 2018.

Moonlighter has the player manage their shop during the day and go exploring at night. Shopkeeping involves managing goods and receiving money, which the player can invest to upgrade the town and add services like a potion-maker and a blacksmith. These town upgrades allow the player to craft weapons, armor, and health potions, hire a part-time worker to sell things during the day, as well as upgrade the characters' equipment. At night, the player can explore dungeons and confront hordes of enemies, which drop loot upon defeat; loot can also be found in chests once the player clears a room.

Moonlighter received "generally favorable" according to review aggregator Metacritic. It won the "Best Indie Game" award of GDC 2018, and was nominated for "Fan Favorite Indie Game" and "Fan Favorite Role Playing Game" at the Gamers' Choice Awards, and for "Most Fulfilling Community-Funded Game" at the SXSW Gaming Awards. However, it was ranked as the fifth blandest game of 2018 by Ben "Yahtzee" Croshaw of Zero Punctuation, who called it "a painfully generic pixel art dungeon crawler whose one unique gameplay idea had all the depth of a Netflix crime documentary."