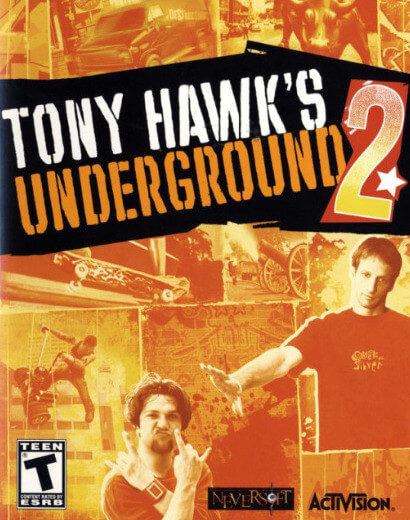 The gameplay in Underground 2 is similar to that of previous Tony Hawk games: the player skates around in a 3D environment modeled after various cities and attempts to complete various goals. Most goals involve skating on or over various objects or performing combos. Scores are calculated by adding the sum of the point value of each trick strung together in a combo and then multiplying by the number of tricks in the combo. New gameplay features include the Focus ability, which the player may trigger with a full Special gauge to cause time to slow down in order to help keep up their combo (by allowing greater control of their grind balance, for example); the Natas Spin, which can be performed on small surfaces like pillars or fire hydrants; and the Freak Out, which serves as another combo starter by having the player fill a gauge after certain bails, which will result in them angrily disposing of their board before continuing their session. In addition, the Wallplant maneuver was repurposed as the Sticker Slap.

A classic mode was added to Underground 2, which allows players to skate through both new and remade classic levels in the traditional 10-goal, two-minute time limit mode that was present in Pro Skater, Pro Skater 2 and Pro Skater 3, complete with the stat points scattered all around the levels. In classic mode, the player chooses from one or two levels in which to attempt to complete enough goals to advance. All of the "remade" levels are accessible only through "Classic Mode" although once unlocked, it is possible to play them in any mode except Story.

The protagonist is skating in their hometown, a neighbourhood in New Jersey, when a van shows up in the middle of the ramp and the protagonist slams into it, knocking them out. Two people wearing hockey masks kidnap the protagonist and take them to a dark room with other skaters. The kidnappers, revealed to be Tony Hawk and Bam Margera, explain their plans for their debut "World Destruction Tour", a worldwide, publicity-free skateboarding tour where two teams (Team Hawk and Team Bam) compete for points, and the losing team has to pay for all the expenses, the player joins Team Hawk while Bam chooses Paulie "Wheels of Fury" Ryan, a foul-mouthed kid who wears a body cast and drives a high powered wheelchair.

In Boston, the first leg of the tour, Team Bam manages to win at the last minute, thanks to one of Paulie's stunts. As a result, Bob Burnquist (a member of Team Hawk) is eliminated, via having a tennis ball shot at his genitals. Later on, in Barcelona, Team Hawk manages to take the lead again, however, the punishment for Team Bam is to having the player swap teams (in this case, Eric Sparrow moves from Bam's team to Tony's team and the player doing the opposite, much to Bam's relief and Tony's annoyance.) At that time though, word had spread out about the World Destruction Tour, which was supposed to be a low-profile event but now is appearing on TV news.

In Berlin, the player and Sparrow are swapped back. At that moment, an underground film "writer, producer, director" by the name of Nigel Beaverhausen wishes to bring the tour to the public but instead winds up being humiliated by Tony and Bam. After causing chaos in Bangkok (the skaters were en route to Australia, though Chad Muska suggested a stop in Thailand), the Tour lands in Australia (actually, Bam's team arrives later due to departure problems that make them wind up in India). At the end of the leg, the player is supposed to be eliminated by being stripped naked and hit by mousetraps launched at him/her, but due to Rodney Mullen spotting a mathematical error in the team's points, the player has to compete with Eric - the loser will be eliminated from the tour.

The group ponders what to do when an Australian skater kid shows them a video of the tour, created by Beaverhausen. Bam then decides that whoever humiliates Beaverhausen will stay on the tour. Eric only manages to steal his clothes but the player, with Nigel's clothes (Bam's idea, as he too does not want Eric around anymore), goes off causing rampage on Australian citizens so that Beaverhausen will be blamed for it. Eric is eliminated as a result, in which to tour kicks off to New Orleans.