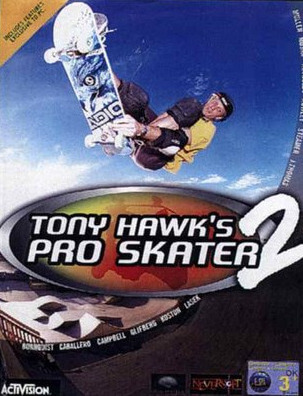 Tony Hawk's Pro Skater 2 is a skateboarding video game developed by Neversoft and published by Activision. It is the second installment in the Tony Hawk's series of sports games and was first released for the PlayStation in 2000, with subsequent ports to the Microsoft Windows, Game Boy Color, and Dreamcast the same year. In 2001 the game was ported to the Mac OS, Game Boy Advance, Nintendo 64, and Xbox (as part of the Tony Hawk's Pro Skater 2x collection). The game was later ported to Windows Mobile and Windows Phone devices in 2006 and to iOS devices in 2010.

Tony Hawk's Pro Skater 2 uses the same game engine as its predecessor while improving the graphics and the gameplay, most notably with the introduction of manuals and cash rewards. The game takes place in a three-dimensional urban environment permeated by an ambience of rock and hip-hop music. The player takes control of a variety of famous skateboarders and either performs skateboarding tricks or collects certain objects. The game offers several modes of gameplay, including a career mode in which the player must complete objectives and evolve their character's attributes with earned profits, a free-play mode in which the player may skate without any given objective, a multiplayer mode that features a number of competitive games, and a level editor that allows the player to create customized levels.

Tony Hawk's Pro Skater 2 was critically acclaimed upon release and remains one of the highest-rated video games of all time, as well as the highest-rated sports video game. All versions of the game were praised, including its addictive gameplay, large environments, detailed graphics, fluid and precise controls, customization features and punk/hip-hop soundtrack, with some minor criticisms directed at the lack of a first-person camera and the truncated soundtrack of the Nintendo 64 version.

Tony Hawk's Pro Skater 2 puts the player in control of a famous or fictional skater and takes place in a third-person view with a fixed camera. The player must perform tricks and complete level objectives in return for cash rewards, which can be used to unlock other levels, improve the player character's statistics and obtain better equipment. The game's universe maintains a loose grip on physics for the sake of gameplay quality; while the player character can jump reasonable heights and perform short slides early on in their career, they may eventually come to slide for much longer distances and reach such a disproportionate height in their jumps as to be capable of stringing an unrealistic chain of maneuvers together midair. The player can move freely throughout the levels without constraint and fulfill the different objectives in any order desired.

In Tony Hawk's Pro Skater 2, the player character is self-propelling and can have their course altered via the arrow keys or d-pad. The player character is capable of jumping and can change direction midair. The game features a vast number of skateboarding tricks. One button can be used to switch footedness between "regular" or "goofy", while another can initiate a nollie or a fakie. Passing from a nollie to a fakie (or vice versa) in a chain of tricks increases the multiplier factor of the cash collected for that figure. Other button inputs can be used to perform slides, grabs and flips. A series of inputs can be used to perform lip tricks. It is possible to perform wall rides and transfers (changing ramps) as well as manuals that allow several tricks to be chained together. The player must use directional input to maintain balance during a manual; in the 2X port, balance is visually represented by a vertical scale that appears next to the player character.

Tony Hawk's Pro Skater 2 features five modes of gameplay: Career Mode, Free Skate, Simple Session, Multiplayer and the Level Editor. The Career Mode is played as a series of levels of increasing difficulty. Each level has ten objectives to perform within a period of two minutes. Some objectives are found in all levels, such as accumulating a particular score, collecting letters of the word "SKATE" scattered throughout the level or seeking and obtaining a hidden videotape. Other objectives are more varied, such as making figures at specific locations, jumping to difficult places or collecting particular objects. Each completed objective is rewarded with cash, which can be used to improve skater statistics and obtain new equipment and playable characters. A select few levels take place in a competition in which the player must perform for judges and accumulate the highest score within three one-minute rounds. The jury bases its score on the variety, difficulty and quality of the performed tricks. To fully complete these levels, the player must both accumulate a score high enough to win a gold medal and collect all the cash scattered within the level. The mode includes a series of small bonuses given for transfers, jumps and slides made across particular environmental elements. A list of these bonuses, referred to as "gaps", are compiled in a checklist that is viewable from the game's option menu. Other single-player modes include the Simple Session, in which the player can freely accumulate a high score within two minutes using any previously-obtained levels and characters, and the Free Skate, in which there is no time limit imposed.

The Multiplayer mode consists of five types of games: "Graffiti", "Trick Attack", "Tag", "HORSE" and "Free Skate". In "Graffiti", players must accumulate the highest score by changing level elements into their own color via the use of tricks. If a player performs a higher-scoring trick on an element that has already been marked, the element will change to that player's color. "Trick Attack" is a mode in which players must accumulate the highest score by chaining tricks together. "Tag" is an interpretation of the traditional game of tag that gives each player a timer, which only counts down when they've been touched by the other player and are therefore "it". The player who is "it" can decrease the speed of the other player and increase the ease in tagging them by performing tricks. The player who causes the other player's timer to run out is the winner. "HORSE" is a game that is played intermittently between two players, who must compete in rounds lasting either eight seconds or until a trick has been made. The player with the lower score on any given turn receives a letter in the word "HORSE" or whatever word the players had generated prior to the game's start. The first player to accumulate the entire word loses. "Free Skate" allows the players to skate freely on the same level without any given goal.

The game's Level Editor incorporates over 100 pieces and a variety of pre-built park bases. The construction of a level is initiated on a flat and empty canvas that can be rotated at any angle. The setting can be altered between themes such as a warehouse or park, and elemental pieces are rotatable and flexible in size.