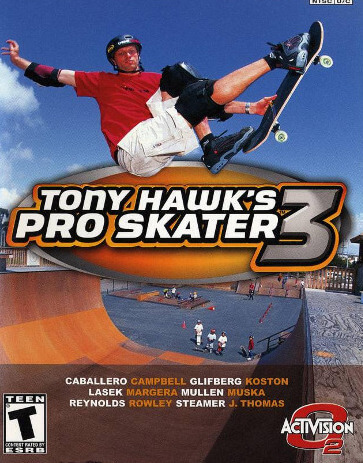 Tony Hawk's Pro Skater 3 is a skateboarding video game in the Tony Hawk's series. Named after professional skateboarder Tony Hawk, it was developed by Neversoft and published by Activision under the Activision O2 label in 2001 for the PlayStation 2, PlayStation, Game Boy Color and GameCube. In 2002, it was published for the Xbox, Game Boy Advance, Microsoft Windows, Nintendo 64 and Mac OS. It was the first game released for the PlayStation 2 supporting online play as well as the last game ever to be released on the Nintendo 6 (which was discontinued 4 months prior to release). According to Metacritic, Pro Skater 3 and Grand Theft Auto III hold an average critic score of 97/100, making them the highest-rated PlayStation 2 games of all time.

This game saw the introduction of the revert, a trick that enabled vert combos to be tied together with a manual, by tapping a button when landing in a quarterpipe. This allowed for much longer combos than in the previous two games, where landing in a quarterpipe would finish a combo. The game also added hidden combos. These were variations on standard tricks that could be performed as grab, flip, lip, or grind tricks. For example, double-tapping the kickflip button would, naturally, make the character perform a double kickflip. This system would later be refined in Pro Skater 4.

The game stood out in the franchise for being the first title to have online capabilities. Users could connect directly to other players online on the PlayStation 2 version—even prior to the launch of the network adapter, with a USB Ethernet adapter. Due to the shut down of most Sony servers the game is no longer playable with others online, except for via programs like XLink Kai or through websites that allow users to play online through a DNS. The PlayStation and Nintendo 64 versions run on the Pro Skater 2 engine, with a different revert animation that is the same as the PlayStation version of Pro Skater 4.

In both the Nintendo 64 and PlayStation versions, the wooden sides on the board (around the grip tape) had colors (except Bam Margera, Jamie Thomas, and the custom skater's decks), and the game had brand-new tricks such as the Cannonball, Wrap Around, Fingerflip, Del Mar Indy and a brand-new animation for the Airwalk. The Xbox version had an improved frame rate over the PlayStation 2 and GameCube version, also including an exclusive level, the Oil Rig.

By July 2006, the PlayStation 2 version of Tony Hawk's Pro Skater 3 had sold 2.1 million copies and earned $77 million in the United States. Next Generation ranked it as the 14th highest-selling game launched for the PlayStation 2, Xbox or GameCube between January 2000 and July 2006 in that country. Combined sales of Tony Hawk console games released in the 2000s reached 10.7 million units in the United States by July 2006. Its PlayStation 2 version also received a "Platinum" sales award from the Entertainment and Leisure Software Publishers Association (ELSPA), indicating sales of at least 300,000 copies in the United Kingdom.

The PS2 version earned a rare perfect 10 score from GameSpot, one of only fifteen games to ever receive said score, "Probably because of the freedom given in this game." It was also awarded the best sports game award at E3 2001. IGN rated the game 9.7/10, stating that the game "Should go down in history as one of the best twitch-fests on PS2. Yes, TH3 is that good. The perfect skating game remains just a tiny hair's breadth out of reach, but if you are not satisfied with your purchase of this game, head examinations are recommended." The game is currently the top rated PS2 game on the review aggregate website Metacritic, with an average score of 97/100, tying with Grand Theft Auto III. Famitsu gave the game a 30/40.