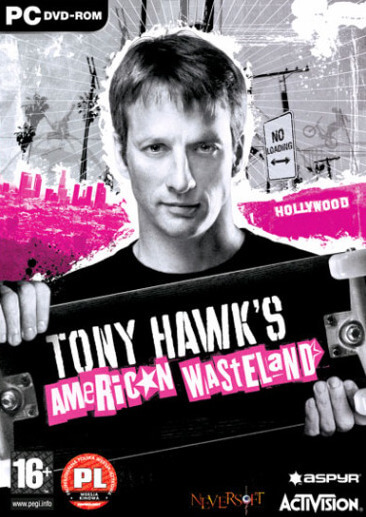 American Wasteland is the first Tony Hawk's game to support Xbox Live; online play was previously limited to the PlayStation 2 and PC. The Nintendo DS/Game Boy Advance version of this game, American Sk8land, features Wi-Fi capabilities. It was the first third-party DS game to have online support.

In the additional Collector's Edition, two exclusive characters and two exclusive levels have been added, this also includes a "Making of Tony Hawk's American Wasteland" documentary.

American Wasteland is the first game in the Tony Hawk's franchise that advertised and allowed the possibility for players to play in one vast level via story mode, which actually seamlessly connects a number of levels without loading times in between, along with also being the first game in the series that allows to freely commandeer stray bicycles and perform freestyle BMX techniques similar to skateboarding. A new maneuver, the Bert Slide, was added to skateboarding controls. In the September 2005 edition of Game Informer, a map was shown displaying American Wasteland's Los Angeles with an insert of an overhead view of the Boston stage from Underground 2 for comparison. The Boston level appeared to be about three quarters the size of one American Wasteland area, with the exception of the "Vans Skatepark" and "Casino" areas.

The game begins with the skater (one of five chosen pre-designed male skaters) boarding a bus to Los Angeles, hoping to get away from the sub-par life in his hometown. Upon arrival in Hollywood, skateboarding punks steal the player's bag after he gets off of the bus. A local skateboarding enthusiast named Mindy helps the player up and offers to help him change his look to fit in better. After a change in wardrobe, the player is quick to reclaim his bag, but Mindy insists that if he is to fit in, he needs to improve his skating skills, and has some local friends, Ian and Duane, teach him some tricks. Eventually, the player confronts one of the punks and challenges them to a skating contest for his bag, which the player wins. Still, the punk tries to run off, but the player beats them with his board and reclaims his bag. The player meets back up with Mindy, who reveals she is an artist working on creating her own skating zine, named "American Wasteland", that she hopes to publish someday. The player then sees a sketch of an awesome local skate park called the "Skate Ranch", and begs Mindy to take him there. Mindy explains that it's a "local's only" spot, but agrees to show the player anyway, and after clearing up a protest blocking their way, the two head to the ranch's entrance in Beverly Hills.

There, the player meets Mindy's skater friends: Boone, Useless Dave, and Murphy, who deny the player entrance due to being an outsider, but decide that if they can impress them, they'll allow the player entry. With help learning more skills from local skaters, the player proves his skills to the group and is let in. He meets the leader of the group, Iggy VanZandt, a rough type who isn't fond of outsiders. Iggy is also initially hostile to the player, but allows them to crash at the ranch after he gathers wood to help finish his half-pipe. While Iggy skates the half-pipe, the player notes Iggy's skating skills, with the group revealing that Iggy was a professional skater back in the day, but couldn't handle the publicity and dropped out of the public eye. After Iggy compliments the player's work on the half-pipe, Mindy comes up with an idea to fix the ranch up and make it into a full-on skatepark, which the rest of the group is enthusiastic about. With the help of Murphy's contacts, the group embark on obtaining skate-able pieces from all over L.A.

From here on in, the overall task is to obtain pieces for the skate ranch, unlocking new areas in L.A. along the way. Eventually, the player participates in the Tony Hawk AmJam, an amateur skating contest taking place in the Vans Skatepark downtown. He wins the AmJam and is interviewed by Tony Hawk, who asks where he learned a unique trick he used during the contest. The player explains he learned it from Iggy VanZandt, prompting confusion from Tony who claims that, "he's been M.I.A. for years". When the player returns to the ranch, however, Iggy is being arrested. Iggy reveals he was living in secrecy to avoid the police for a number of minor offenses until the player publicly revealed at the contest he is still alive. Wanting to make amends for getting Iggy in jail, Mindy suggests the player seek out Iggy's old friends, the Z-Boys, for help. After making his way to Santa Monica, the player meets skating legend Tony Alva, who agrees to help them out if he can prove his old-school skating skills. After impressing Alva, the player learns of Iggy's history with the Z-Boys, and Alva shows the player an old photo of "Green Pipes Point," a legendary snake run that got filled in many years ago. However, the player recognizes Green Pipes Point as being Iggy's ranch. When the player decides to have it dug up, Alva suggests meeting with his friend Mega, an oil rig worker, who is quick to assist in digging up the snake run.