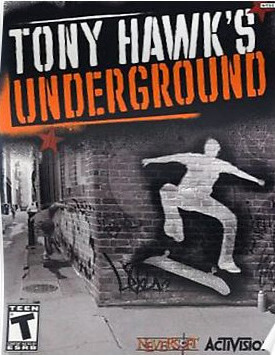 Tony Hawk's Underground is a skateboarding video game published by Activision in 2003, the fifth entry in the Tony Hawk's series. Neversoft developed the GameCube, PlayStation 2, Xbox versions, Beenox developed the Microsoft Windows version, which was released in Australia and New Zealand as a budget release in 2004, while the Game Boy Advance adaptation was developed by Vicarious Visions and a mobile version by Jamdat.

Underground is built upon the skateboarding formula of previous Tony Hawk's games: the player explores levels and completes goals while performing tricks. The game features a new focus on customization; the player, instead of selecting a professional skater, creates a custom character. Underground adds the ability for players to dismount their boards and explore on foot. The plot follows the player character and their friend Eric Sparrow as the two become professionals and grow apart.

The game was developed with a theme of individuality, which was manifested in the extensive customization options, the presence of a narrative, and the product's characterization as an adventure game. Real-world professional skateboarders contributed their experiences to the plot. Upon release, the game was a major critical and commercial success, with reviewers praising its wide appeal, soundtrack, customization, multiplayer, and plot. The graphics and the controls for driving vehicles and walking were less well-received. Underground's PlayStation 2 version had sold 2.11 million copies in the United States by December 2007. A sequel, Underground 2, was released in 2004.

Like its predecessors in the Tony Hawk's series, Underground is centered on skateboarding in a series of levels. The player performs tricks via combinations of analog stick and button inputs. For example, the player initiates an ollie (a jump trick) by holding and releasing the jump button. During an ollie, the player may change the position of the analog stick and press one of two buttons to perform either a flip trick (such as an impossible or kickflip) or a grab trick (such as a benihana or nosegrab). The player can grind on certain edges and rails; different tricks may be performed during a grind based on the position of the analog stick. On quarter pipes, the player may execute lip tricks. While skating on flat surfaces, the player may manual in multiple ways via button combinations. Miscellaneous tricks include acid drops and wall-rides.

While a grind, lip, or manual trick is underway, a balance meter appears: unless the player prevents this meter from falling to the left or right, the character will bail and need a few seconds to recover. Bailing can also be caused by falling without one's board facing downward. Completing tricks in succession without bailing is called a combo. Comboing raises the player's score and fills up the Special Meter; when it is full, the player is granted access to more elaborate tricks worth more points, such as the McTwist and 540 Flip. Underground introduces the ability to dismount one's skateboard, which allows the player to explore levels more carefully and reach new areas. Each level features at least one vehicle, usually a car, that the player can drive.

The levels are based on regions of the United States and other countries. In each level, certain tasks that advance the game's narrative must be completed before the player can move on. These tasks include score attacks, races, item collection, and reaching one of many gaps found in a level. Each level houses one professional skateboarder, who provides a sidequest that unlocks a trick for the Special Meter. On account of the levels' large sizes and the integration of goals into the story, Underground has been described as an adventure game. Characters can level up their stats—which include jump height and speed—by completing optional goals in a level; this adds an element of role-playing gameplay. Other gameplay modes include multiplayer minigames—one, a combat mode called "Firefight", can be played online in the PlayStation 2 version of the game—and a "free skate" mode that lets the player explore levels with no goals or story.

Underground features extensive customization. The player creates a custom character for the story mode, and may not play as a pre-made professional skater outside a few contexts: a special scene late in the game, minigames, and the free skate mode. A level editor allows the player to create skate parks with a large array of objects, ranging from traditional skate park elements like halfpipes, ramps, funboxes, and grind rails to more outlandish pieces like buildings and sections of elevated freeways. The player can change their park's time of day and environmental theme. Tricks, skateboards, and level goals may be customized as well.

While the console versions of the game are fully three-dimensional, the Game Boy Advance version is rendered in an isometric style that incorporates both 2D sprites and 3D models. This version is a more traditional Tony Hawk's game, with little attention given to the story or customization. The mobile version is similarly restricted.

The protagonist and their friend, Eric Sparrow, live in suburban New Jersey and dream of becoming famous skateboarders. The protagonist manages to impress professional skater Chad Muska, visiting town for a demo, who gives them a new skateboard and informs them that a good way to start a skating career is to gain a sponsorship from a local skate shop. The protagonist seeks out Stacy Peralta, who agrees until he sees something to set them apart from the other local skaters, so the protagonist travels to Manhattan with Eric, who is on the run from drug dealers after setting their car on fire for stealing from the skate shop.

There, the pair shoot a skating video that impresses Stacy, who loans them a van and suggests they enter the Tampa AM, an amateur division skate contest held annually at the Skate Park of Tampa in Tampa, Florida. Upon arrival, Eric is arrested for insulting a police officer, and the protagonist does favors for the local police department to secure his bail. However, when they arrive for the contest, it is revealed that Eric had only completed his own application form and not the protagonist's, forcing a dejected protagonist to try and impress competitors in the pro contest in order to gain admission. After impressing Tony Hawk, the protagonist wins the Best Trick event at Tampa AM and is offered deals by major skateboard sponsors, much to Eric's dismay. The protagonist then heads to San Diego, California to meet Todd, the manager of the team, and completes several photo shoots for a magazine. Following a wild celebration party, it is revealed that Eric has been picked up by the same sponsor.