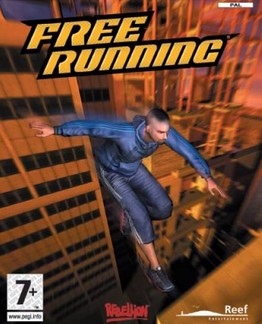 Free Running is a 2007 video game for the PlayStation 2, PlayStation Portable, Wii and Microsoft Windows, developed by Rebellion Developments and Core Design and published by Ubisoft, Reef Entertainment, and Graffiti Entertainment.

Free Running is a freerunning sports game, with mechanics similar to those found in skateboarding titles such as the Tony Hawk's series. The objective of the game is a representation of freerunning, and players must demonstrate speed, rather than flamboyance. The player is required to navigate their character through an urban environment by climbing, leaping, wall-running and other acrobatic maneuvers. Points are earned by performing combinations of such moves, and completing mini-challenges such as checkpoint races.

The game received "mixed" reviews on all platforms according to the review aggregation website Metacritic. Eurogamer criticized the PlayStation 2 version's stiff controls and camera, leading to unease in performing tricks and combinations. It did not compare favourably to the fluid movement in Prince of Persia: The Sands of Time and Crackdown – titles that were deemed to be better free running games than Free Running.