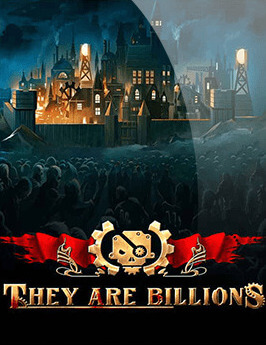 They Are Billions is a post-apocalyptic steampunk real-time strategy survival video game developed and published by Numantian Games. Available on Microsoft Windows, it was released onto Steam's Early Access program with a survival mode in December 2017. The game was released with a campaign titled "New Empire" on June 18, 2019. PlayStation 4 and Xbox One versions were published by BlitWorks on July 1, 2019.

They Are Billions pits the player in a randomly generated steampunk themed, zombie-infested world. The player's goal is to build a base to protect themselves, by planning the layout and defenses, exploring the map, collecting resources and expanding while fighting the local zombie population at the same time. Infected villages, called Villages of Doom, can be pillaged for resources, although a backlash of zombie swarms can result. There are eight resources that the player must manage: gold, food, workers, wood, stone, iron, oil, and energy. Structures and units, many of different variations and following a tech-tree, will require different materials to be made. Though zombies will attack at erratic, but slow times, at certain intervals throughout the game, large hordes of zombies will attack, focusing on one side of the base until a final wave coming from all directions (and in massive numbers). The player must keep zombies from breaching base defenses and infecting non-defensive structures, especially in tight or overdeveloped areas where a domino effect outbreak can occur. Much like the player has access to different unit types, zombie types are also varied, ranging between slow, decrepit ones, extremely fast zombies called "Harpies", highly-resistant ones known as "Butchers" and others, including a massive "infected giant" that has high health, speed, and damage that is also highlighted on a minimap, requiring the player to not only have a strong defensive perimeter (with walls, turrets, towers and traps), but also adapt tactics accordingly. While it is a real-time strategy game, players can pause at any time in order to plan future actions and give simultaneous orders.

The teaser trailer sets the date for They Are Billions in the late 22nd century, following a world-wide rabies-like infection which has triggered a zombie apocalypse, especially in the world's megacities. While initially the survivors attempted to establish villages and even fortresses to stave off the zombie hordes, eventually these fell with their technology failing them. However, a few thousand humans survived, united under General Quintus Crane, and began to rebuild civilization amidst the infection. The apocalypse caused a severe technological regression, so technology is now at a 19th century level.

The upcoming campaign will see the player as a colony administrator and commander under Quintus, who desires to create a new human empire. He plans to conquer new territory by building well-managed fortified colonies, all connected by a railway network. Across the campaign, the player will build a personal army composed of mercenaries, renegades, and even convicted criminals to handle the zombie swarms. At the same time they will recover technologies and gradually learn about the origins of the infection. The player will meet new characters, some considerably more insane than others, but all with special and relevant information.

They Are Billions was announced by Numantian Games on May 30, 2017. It was released on December 13, 2017 on Steam's Early Access program with survival mode. The game quickly rose to the top selling charts on both Steam and the Humble Bundle storefront.

The game was nominated for "Best Spanish Development" at the 2019 Titanium Awards.

They Are Billions System Requirements

(0) Comments on "They Are Billions Full Version"