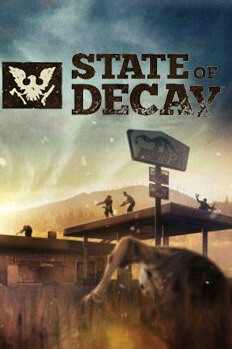 State of Decay is an action-adventure survival horror stealth video game developed by Undead Labs and published by Microsoft Studios. It places emphasis on how the player's leaderships skills fare against an onslaught of problems, such as diminishing survival resources, group trust and morale, zombie extermination, base defenses, and people's lives. The game combines elements of shooters, stealth, role-playing and strategy games and the game challenges players to survive by exploring, scavenging, and fighting the undead.

State of Decay 2 was announced at Xbox's E3 2016. The game introduced cooperative multiplayer. It was released on May 22, 2018.

State of Decay contains elements of third person combat and simulation (building base and outposts). The player is in charge of a small group of survivors and can either follow the storyline or perform tasks that ensure their community's survival. The game world is 16 square kilometers, 8 square kilometers of which is playable.

The player can choose from several locations to build a base, then reinforce and improve it with various facilities like watch towers, gardens, sleeping quarters, kitchens, workshops, medical bays, etc. to help keep survivors safe and healthy. Part of the game is balancing the use of resources: food, medicine, ammo, and construction materials. They can be obtained by scavenging, trading with NPCs, only food can be grown at the base.

The player can interact with survivors outside of their group: trading with them, helping them or recruiting them. The game features two relationship meters, the first determines if a survivor can be recruited, and the second dictates if they can be controlled. Only one survivor can be controlled at a time, though the player can ask an AI-controlled survivor to accompany them, and in certain missions, one or more AI-controlled survivors will accompany the player.

The Storyline mode features around 150 characters, with varying facial features and clothing. Each character has a fixed set of "traits" which give them advantages or flaws (such as tire out more easily, or can improve a certain skill faster). Except for the story-related characters, most characters can be assigned to survivor groups and be recruited. Each character also has an "attitude" parameter, affected by game events (a near death experience, death of another character, or having accomplished a difficult task). These attitudes can affect their behaviors, sometimes requiring player intervention.

Zombies are the main threat in State of Decay. They respawn infinitely (unless the player establishes an outpost, which prevents spawns), are attracted to noise, and are capable of sprinting nearly as fast as the characters. The player can choose to confront them directly, use stealth to sneak past them, or divert them using items like firecrackers. In addition, there are special types of zombies, such as the animal-like "Ferals" or the tank-like "Juggernauts" that are quite dangerous in one-on-one confrontations. The game doesn't have human enemies, only zombies.

The game features over 100 different weapons, including around 30 melee weapons that can be found while scavenging (they cannot be crafted). Melee weapon and firearms are further divided into sub-categories, which have different attack animations and effects. All weapons have a durability rating, and will break when used excessively without repairs. Besides weapons, the player can find or create various consumables to improve their chances of survival, such as painkillers and pipe bombs. Besides walking, the player has access to several types of cars, each with its own characteristics like maneuverability and speed. All vehicles can be damaged and destroyed when running over zombies or hitting obstacles, although they can be repaired at the home base if they have the necessary facilities.

The story takes place in the fictional Trumbull Valley. The first playable character is Marcus Campbell, a store clerk. After returning from a fishing trip with his friend and a Trumbull local, Ed Jones, he finds that the world has degenerated into a zombie apocalypse. The two are soon joined by Maya Torres, a soldier. They acquire a walkie-talkie and make contact with Lily Ritter. Following her direction, they make their way to a church called the Church of the Ascension, where Lily and several other survivors have made a home base. With Ed wounded, the trio accept Lily's offer to let them stay.

As the game progresses, the survivors become aware of the United States Army's presence in Trumbull Valley, led by Sergeant Erik Tan and Captain Diane Montressor. They soon learn that the army's top priority is not to evacuate the survivors, but to contain and try to find the cause of the outbreak. The players also find the local civic leader, Judge Lawton, has barricaded the courthouse with the local law enforcement. She places citizens in her care under martial laws, planning to rebuild after the zombie incursion blows over. Finally, the players are also introduced to The Wilkersons, a group of hillbilly gun-runners who are using the apocalypse to profit and exploit other survivors.

Near the end, the courthouse falls to a zombie attack and Judge Lawton dies. Captain Montressor is evacuated, leaving behind Sergeant Tan and his men. The player, along with Tan, discovers numerous dead bodies dumped at the reservoir, explaining the cause of the, "Black Fever," that has plagued numerous survivors in Trumbull Valley. With their only water source contaminated and long term survival no longer an option, they plan to leave the valley. After raiding a zombie-infested warehouse to get explosives, the group head to the only road leading out of the valley, now blocked with a massive concrete wall.