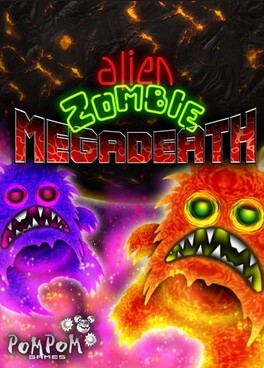 Alien Zombie Megadeath is an action shooter video game, developed by PomPom Games for the Microsoft Windows and PlayStation 3. The game features alien creatures that spawn at various levels of the game for sole purpose of killing the character controlled by the player.

Alien Zombie Megadeath is an arcade-style shooter, where each stage has a certain number of horizontal platforms where the player's character can run and jump around. The general concept of the game is navigating those platforms while dodging the enemies. The main weapon is the blaster, used to kill enemies. Once they are defeated, each of them will drop small gems. Picking them up, along with larger gems that appear on the screen, increases a point multiplier which increases the high score.

Progression in the game is connected to earning medals that are awarded for specific, progressively harder challenges within each stage. There are two types of stages: Alpha and Adventure. In Alpha stages, there is no set amount of time or enemies to spawn, putting the emphasis on survival. That isn’t the case during Adventure stages, where enemies need to be baited for collecting their crystals upon death.