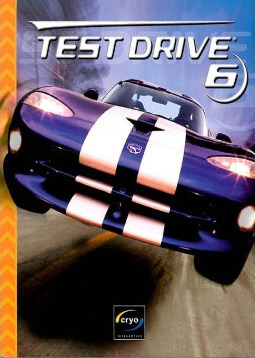 Test Drive 6 is a racing video game developed by Pitbull Syndicate for PlayStation, Game Boy Color, Microsoft Windows and Dreamcast. In the United States the game was published by Infogrames North America, while in Europe the game was published by Cryo Interactive. The game featured 37 licensed cars, plus four police car variants. The soundtrack featured industrial rock and techno music from artists such as Fear Factory, Lunatic Calm and Cirrus.

As of 2019, the PC version of the game has compatibility issues preventing it from being played properly on modern computers. The game's soundtrack no longer plays due to the removal of Windows' CD audio compatibility for games. The installer does not work on Windows Vista and newer, necessitating a drag-and-drop install. Use of the dgvoodoo wrapper allows the game to be played somewhat accurately on newer systems, though music is still missing.

Single race allows players to choose a car and track and play it without any of the requirements or repercussions of career mode. Likewise, this mode has a small selection of cars from all classes available even if the player has not unlocked or purchased them in Race Menu.

The Race Menu career mode allows the player to purchase a vehicle from the Tier 1 dealership and provides them with tournaments to race in, limited by tier. The player wagers in-game currency on each race in the tournament and can receive an extra bonus payout for overall finishing position. Tournaments increase in length, difficulty and payout amounts by tier. The mode also features Stop The Racers and Stop The Bomber modes wherein the player drives a police car in pursuits.

Matt Sammons reviewed the Dreamcast version of the game for Next Generation, rating it two stars out of five, and stated that "This strange mix of bumper cars and sports cars is stunningly mediocre. Test before driving."

Test Drive 6 received "mixed" reviews on all platforms except the PC version, which received "unfavourable" reviews, according to the review aggregation website GameRankings.

Writers of IGN gave many different opinions to each of the game's system releases. First, David Zdyrko said of the PlayStation version, "After six tries, they still haven't gotten it right." Arun Devidas said of the PC version, "It's not the best racer in town, but Test Drive 6 still has a few redeeming qualities." Craig Harris said of the Game Boy Color version, "Cruising along city streets in real cars should be more fun than this Game Boy racing title." Matt White said of the Dreamcast version, "Infogrames struts their stuff, showing us that they have what it takes to slaughter an innocent game."