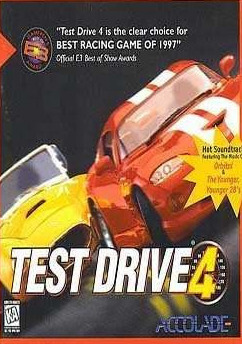 Test Drive 4 is a racing video game developed by Pitbull Syndicate and published by Accolade for PlayStation and PC in 1997. Test Drive 4's release propelled the TD franchise to the height of its popularity, outshining its arguably better-known competitor, Need for Speed, which it managed to outdo both technically and financially, briefly making Test Drive the best selling racing franchise. In 1999 the game was republished under the Greatest Hits label after selling 850,000 copies within one year of its release.

The game follows the same path as its predecessors by taking the player on a quest to win new tracks and vehicles. This installment has the added twist of going international, with the challenge now spanning locales around the world. Test Drive 4 features 14 modern and classic street-legal vehicles, covering a wide range of makes and styles. Only a few vehicles are available to the player from the outset, with the rest needing to be won or purchased as the game progresses. There are six tracks with locations in five different countries.

The PlayStation version of the game supported its System Link feature, which allowed two-player multiplayer racing without using split screen through the use of a proprietary cable connecting two consoles. This allowed each player to have their own display, and required two copies of the game, as well as the consoles and cable.

Test Drive 4 received "average" reviews on both platforms according to the review aggregation website GameRankings. In Japan, where the PlayStation version was ported and published by Electronic Arts on 2 April 1998, Famitsu gave it a score of 27 out of 40.

Next Generation reviewed the PlayStation version of the game, rating it two stars out of five, and stated that "Had developer Pitbull done away with the hazards and just stuck to the driving, Test Drive 4 might have been a decent racer. As it stands, it's just another Need for Speed. And nobody needs that, not even EA."