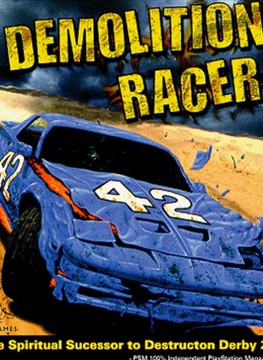 Demolition Racer is a vehicular combat racing video game for the PlayStation and PC that combines destruction and driving tactics in a fast-paced racing environment. It is very similar to the Destruction Derby series. The PC version contained slightly better in-game graphics than the PlayStation version, and included varied weather and times of day. Drivers are given (optional) wacky portraits which displayed on the side of the screen in a race, showing who's ahead of who.

The game was rereleased for the Dreamcast as Demolition Racer: No Exit, which featured new tracks, new cars, unlockable minigames, and an additional mode called "No Exit", which plays the same as Last Man Standing in the other games. In No Exit's version of Last Man Standing, the player must now try to survive as long as possible. The game was also redesigned and enhanced. For example, the graphics were upgraded (same goes for the HUD and menus), the levels now have ambient sound effects (such as crowds cheering), and all of the drivers' cars are also shown on the results screen in what condition they were left with at the end of a race.